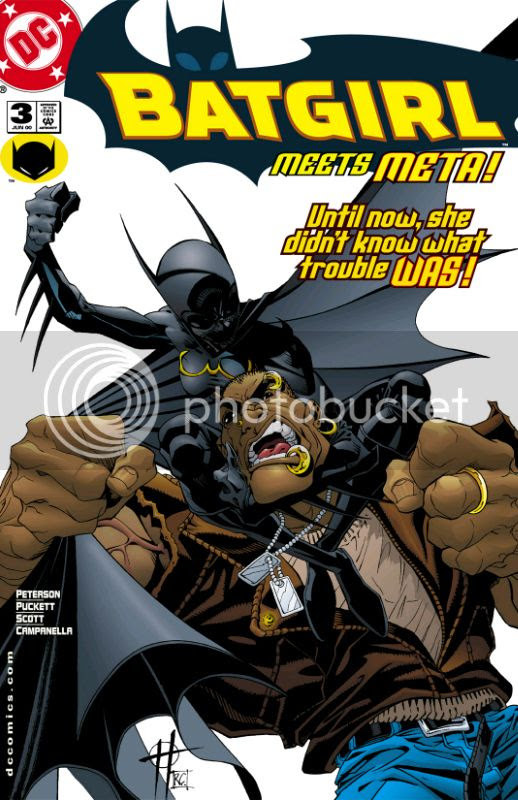 Synopsis:  Batman takes Batgirl along to rescue a kidnapped child and his protege fights her first "metahuman" opponent, a brute with facial piercings.  Battered and exhausted, Batman heads back to his lair only to find himself shaken to his very core after he watches a snuff film starring a very familiar little girl.

This is one of those issues where Batman comes close to being an intolerable jerk.  I'm wrong.  Not close so much as dead smack in the center of it.  Let's face it-- the Batman not only touches being a jerk, he smashes his head into jerkdom repeatedly, cracking it and spoiling its value for other arch-jerks like Guy Gardner.  Fortunately, Oracle calls him on it.  Batman shows up babbling nonsense about Batgirl having failed the poor guy from the previous issue, the guy she did everything humanly possible to save and Oracle sensibly tells the Caped Crusader if he tells Cass any of that he's no longer welcome to hang out and play Marvel vs. Capcom 2 with her anymore.  There's a difference between being the consummate bad-ass, driven by your obsession and being both a moron and a prick who demands your apprentices become somehow omniscient and omnipresent.  Batman seems not to realize this.

The plot is framed by a bleeding and emotionally devastated Batman remembering the events that unfold in this story and then the moment where he took the hit that laid him so low-- that little video showing a pony-tailed child at play, a game that involves tearing out a full-grown man's throat.  Then doing other stuff to him that's apparently so horrifying we're not even allowed to see it on-panel, just Batman's open-mouthed reaction along with some sound effects.

Once again Peterson and Puckett script a quick-paced story with a bare-bones plot but maximum impact.  The fight with the metahuman-- the Comixology blurb names him as Meta (which is perhaps the lamest on-the-nose codename since Hiroko Ichiki took the name Armor during the Joss Whedon run on Astonishing X-Men) but I don't think he's called anything in the story itself-- is appropriately frenetic with a neat physical contrast between the combatants as lithe, small Cass clambers all over this man-mountain in an attempt to stop him.  It's an apparent mis-match, but shows Cass as determined, almost suicidally so.  This will become more apparent over the next few issues.  The fight could be more brutal and frightening.  A little more alarm from Batman would have set up further character developments, but it's an easy sequence to scan.  Scott excels at showing bodies in motion and Campanella's inks keep things clean and readable.

I'm guessing in the DC universe being "meta" is similar to being a mutant in the Marvel universe-- just a catch-all term for what amounts to magical abilities.  The guy Cass fights isn't explained and his abilities seem to consist of unusual size, strength and constitution.  On planet Marvel, being a mutant means you can have pink hair and pixie wings if that's what the kids are into that year, or you can have a plastic cash register for a head and "Money" as your code-name if the writer is some kind of whimsical dimwit.  Calling it a mutation just gives it a pseudo-scientific gloss.  Similarly, in Gotham City, if you're meta, you're just pierced and tough if that's what the story calls for this month.

Despite taking up the most story pages, the fight isn't even the most interesting thing that happens in this issue.  We get more Cass backstory as she flashes back to a fun day she had with daddy Cain (assembling an automatic pistol while he playfully covers her eyes, her expression one of pure joy at completing it in record time; that it isn't more horrifying is more the result of the slick, cartoony art working against the mood rather than supporting it than the idea of this man essentially warping a child's mind and betraying her innocence and trust in the father-daughter dynamic) and then the Bat-poop starts to hit the Bat-fan thanks to the video.  Here the main thrust of Cass's narrative really begins, where she will battle with her own guilt and resulting death wish and Batman's unrealistic expectations and whether or not he feels she's worthy as a successor to his Bat-franchise.

Cass's continued terse-ness is fun, too.  She's developing a small vocabulary of simple words she deploys like weapons.  Batman lectures her on expecting the impossible before he realizes she doesn't understand anything he's saying.  He asks her if she does and she simply replies, "No."  You get the feeling she probably picked up on more of his meaning than she lets on and rejected it as just as stupid as Oracle did.  She does use at least Batman's body language as inspiration during her big fight scene.  Batman's right about one thing-- if you are actually present and wearing the costume, you can't allow yourself to fail (but all that noise about not allowing yourself to fail when you're not present is, again, idiotic, like something Joseph Heller would come up and have some satirical fun with).

The art team does even more to help her communicative skills by drawing her (and every character, for that matter) with scene-specific facial expressions.  They stick with the broader strokes, though.  Peterson seems to love the low-angle distorted face, as if seen through a fish-eye lens, all chin and gigantic noses with startled eyes and gaping mouths.  He can't seem to decide on a musculature for Cass at times, but this is probably a product of his energetic pencil stylings.  His art is much more expressive than realistic and occupies a continuity with Bruce Timm and early-career Bernie Wrightson, but without their ability to work darker moods.  What he and Campanella have together is oodles of appeal.  The panels ripple with movement and energy and they're just pleasing to look at.  Still, Cass has massively muscular thighs in her first appearance, then turns wiry and thin-limbed for the rest of the book.  Yet little Cass looks pretty much like teen Cass, just smaller.  I have to wonder when those ponytails sprouted, since she seems to have worn the same hairstyle as a child she does as Batgirl.

Once again, a vivid story that takes all of about five minutes to read but providing just enough depth to keep you curious, to make you want more.  Slowing down a little and focusing more on the subtle emotions instead of the broader strokes might have elevated this issue to a true classic.  I remember reading this a year or two after it came out and feeling they were in danger of using up all the A-material.  But the potential for Cass as a character seems limitless and we're only three months into the series.
Posted by Unknown at 5:04 PM