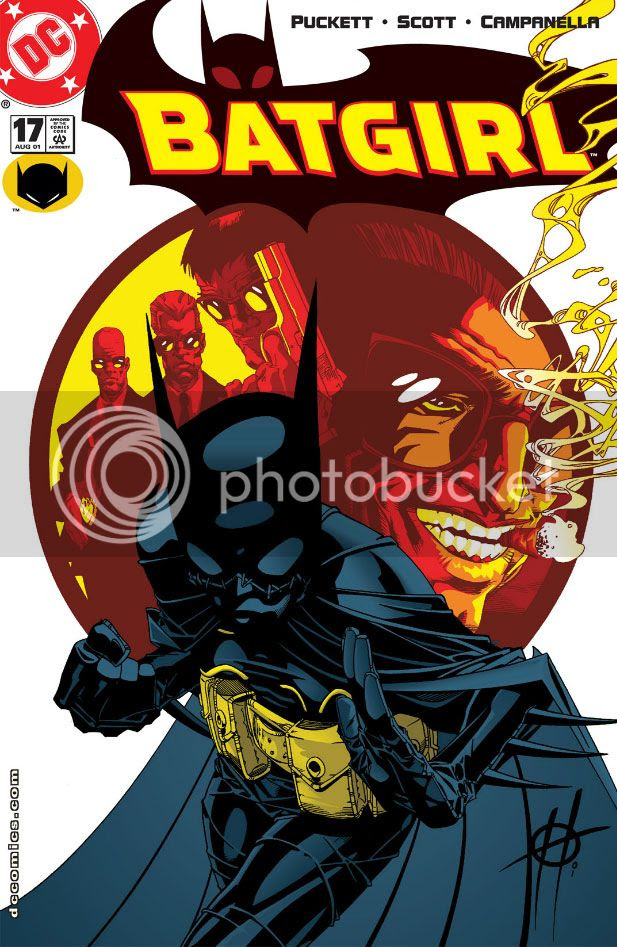 When a simple street thug manages to hit Batgirl in the face-- and it's such a feeble blow she barely reacts-- Batman and Oracle start arguing about what it means.  Batman thinks Batgirl needs vengeance against the CIA goon who killed a man she tried to protect, Oracle thinks she needs some time in the sunlight.

I'm going to have to go with Barbara Gordon on this one.  After all,  Batman is a one-idea man.  Batman thinks vengeance is the answer to any problem.  Lightbulb didn't last as long as advertised?  Vengeance.  And this is before writers made Barbara's concerns more about forcing Cass into a traditional gender role box, at least the comic book version of one.  As written by Puckett, Barbara comes off as genuinely concerned about Cass's well-being and not the shrill one-size-fits-all harangue-artist she'd appear to be later in the series.  This leads to an emotionally affecting sequence where Cass quite literally crawls out of a hole in the ground to commune in the daylight with ordinary people.  Drawn by Scott and Campanella, and colored by Wright in a yellow monochrome that captures the dazzle effect of harsh sunshine, it's a silent moment depicting just how apart from normal life Cass exists.  Fantastic job on her facial expressions as she shields her eyes because daylight is too bright for her-- it's really quite touching and sad.

We get the action, too.  Batman and Oracle send Batgirl out to erase her government files, restoring her anonymity.  Oracle offers radioed advice which Batgirl largely ignores, and then it's time for Batman's form of therapy.  We've seen Batgirl dodge bullets before, but this time Scott uses a simple two-panel cut-- bad guy shooting, angry Cass standing there with a lot of holes in the wall behind her.

Flower make yet another symbolic appearance as Cass adopts a single rose.  At story's end she and Barbara enjoy a day out together and Barbara demonstrates to Cass how to care for her little flower.  A cut flower is essentially dead, isn't it?  No matter how long you try to keep it in water the blossom will wither and the petals will fall off one by one.
Posted by Unknown at 9:22 PM No comments:

Doing my morning Cass-search for things Cass Cain-related to discuss here and I found an amusing story on The Outhouse (practically the only site that name-drops Cass on a weekly basis these days) about Dan DiDio confusing Kate Kane, the current Batwoman, with Kathy Kane, the Golden Age Batwoman.  Kate-Kathy, Kathy-Kate.  That's kind of goofy, but what jumped out at me was this one sentence in particular.

The only characters DC seems to think about are Silver Age ones, which obviously fits with the forty-five year old fanbase DC claims to publish comics for.  --The Outhouse

"Claims" seems to suggest a healthy skepticism on the part of writer Zechs, but as a person who is 45 myself, I immediately thought, "Can this be true?  DC is aiming their comics at people my age?"  I also wondered if this was one of those The Outhouse jokes I sometimes find funny and sometimes don't.  I clicked the link embedded in the sentence and found another The Outhouse story, this time by Jude Terror with a massive pull-quote from a Paul Pope interview at Comic Book Resources.  I followed that quote to what I'm guessing is the original story and there it was.

I'm guessing, because by then my 45-year-old body was giving out on me.  Knee pain, shortness of breath, a tingling down my left arm.  The usual stuff.  I had to stop chasing this story in ever-tightening circles and deal with the images from my own life that came flooding back for some reason...

So Gene Yang and Paul Pope did a two-person panel at the San Diego Comic Convention over the summer and here's the quote in case you don't care to link-chase:

Asked by Yang if he had tried to do an all-ages book with a franchise character, Pope said he did test the waters, only to be knocked back. "Batman did pretty well, so I sat down with the head of DC Comics. I really wanted to do 'Kamandi [The Last Boy on Earth]', this Jack Kirby character. I had this great pitch… and he said 'You think this is gonna be for kids? Stop, stop. We don't publish comics for kids. We publish comics for 45-year olds. If you want to do comics for kids, you can do 'Scooby-Doo.' And I thought, 'I guess we just broke up.'"  --Comic Book Resources

As a 45-year old, I'd much rather read an all-ages Paul Pope Kamandi book than any of DC's New 52 continuity.  But as a Cass fan, I'd rather read a Pope Cass Batgirl book.  Pope would have done some eye-popping covers for her series, too.  Hey, just for fun imagine a Cass-Stephanie Brown book written and drawn by Paul Pope.  Wouldn't that be seven layers of heaven?

At last... a Cassplay tutorial!

Out of nowhere, a cosplayer and blogger named daggerpen hit me with a link to a Cass Cain Batgirl tutorial that really made my day.  One thing I want to do here is promote Cass visibility and Cassplayers at any comic convention or fan gathering do more for the character than a thousand blog posts here at the sad little Cass-blog nobody reads.  Daggerpen has put together a solid Cass look (the emblem is especially sharp and well-defined, which adds a lot to any "professional" presentation), and also provides solid information and links for any potential Cassplayer to follow suit (A pun!  I am so clever!).

One thing that interests me about this-- the color scheme.  Obviously, Cass Batgirl has a very basic scheme.  It's two colors, black with yellow highlights.  One thing you have to do-- and daggerpen nails it-- is match the yellow on the bat-symbol/emblem to the yellow on the utility belt.  This really ties the look together and breaks up the black in a uniform manner.  Some may choose to go with gold highlights, which is fine as well.  Comic book illustrations leave room for interpretation and even the comic book artists themselves provide variations of material and specific details.

Cass' Batgirl costume is a very dramatic and difficult one to pull off with that over-the-face cowl-mask arrangement.  It'd probably be easier to be Black Bat since you only have to worry about making a flared domino-style mask rather than something clinging to your facial contours.  While I love any kind of cosplay, people who can rock a Batgirl Cass get an extra dollop of respect. And people who share their ideas in a practical way get another on top of that.

Thanks, daggerpen!
Posted by Unknown at 9:45 PM No comments:

I'd read a Marvel comic about Stephanie Brown

Or even just featuring Stephanie as a guest character.

I find The Outhousers to be very hit-or-miss with their attempts at humor, but the headline "Marvel to Bring Back Stephanie Brown" made me laugh.  It's exactly the kind of absurdist joke that tickles me.  I planned to write a little blog entry about it over a month ago but never got around to it, never had much time.  Today I found time so I did a quick Google news search and found...

It's actually Marvel's joke!  Well, no matter.  It's still funny.  It would be funnier still if Marvel follows through with it.  Now that would be the kind of absurdist joke that both tickles me and gets some of my money.  They could toss in Cass and make me a confirmed Marvelite.

I've often suggested Marvel do a buddy book starring Dani Moonstar and Xi'an Coy Manh as they travel the US (or even the world) in a Chevy Custom van and solve people's problems.  Hey, why not throw Steph and Cass in there, too?  Maybe they could be a band or something.

Posted by Unknown at 6:07 PM No comments: