Most people-- writers especially-- want to find an audience for their enthusiasms.  We write for reaction.  Ideally, acclaim and love and good things.  Occasionally, even those more negative emotions.  Not that I write to anger anyone (we leave that for people who like to start trouble in comment threads), but as far as I'm concerned, as a writer of a blog the only thing more disappointing than a negative reaction is no reaction at all.  Since nobody really cares what I have to say about a character who isn't even appearing in comic books anymore, I've gotten kind of used to low hit numbers, no comments, no links and all that.

The biggest reactions I've gotten to Cass-O-Rama have to do with the My Ten Favorite Cassandra Cain Moments post, which I first put on my When Comic Books Ruled the Earth blog and then posted here when I decided to separate my love for Cass Cain comics from my love for ancient comics from another age.  In the immediate aftermath of the original post, someone took offense to my feeble jokes about Stephanie Brown and Tim Drake and wrote a rebuttal on her blog.  Her readers-- who far outnumber mine-- had a lot of fun tearing me a new asshole over that.  Then, just this morning I got another reaction to that post and this time it was from someone who declared it a work of "feminist extremism" because of a single sentence.

It made me think this was 2006 all over again, but only for a moment.

Anyway, the main point of this blog is to celebrate a character I enjoy.  While I consider it pretty apolitical, because it's about a female character in a male-biased medium, every so often things will creep into it that reflect my personal views on gender and gender relations, on sexuality and sexual identity.  I try to be objective and back things up with facts when I'm making a real-- by "real," I mean historical or non-satirical-- point, but I'm no scholar of these particular topics, having done only a little bit of reading of any academic works about them.  Other than that, I've done a little listening to people's concerns about how they're treated.  That's about it.

In fact, I consider myself pretty much a neophyte in this kind of thought.  There are other blogs and other voices way more advanced in theory than I'll ever be, and much more passionate and involved.  And I've touched on LGBTQ issues even fewer times than I've addressed so-called feminist topics.  I only occasionally and very briefly write on those subjects and only call out the most obvious examples of dumb things I come across in comics.  This is all I feel competent to do, although I have very strong feelings of my own on all of these issues as well.

So I don't feel qualified enough to call myself a feminist or a militant.  Thanks for the compliment if you consider me either.
Posted by Unknown at 4:57 PM No comments: 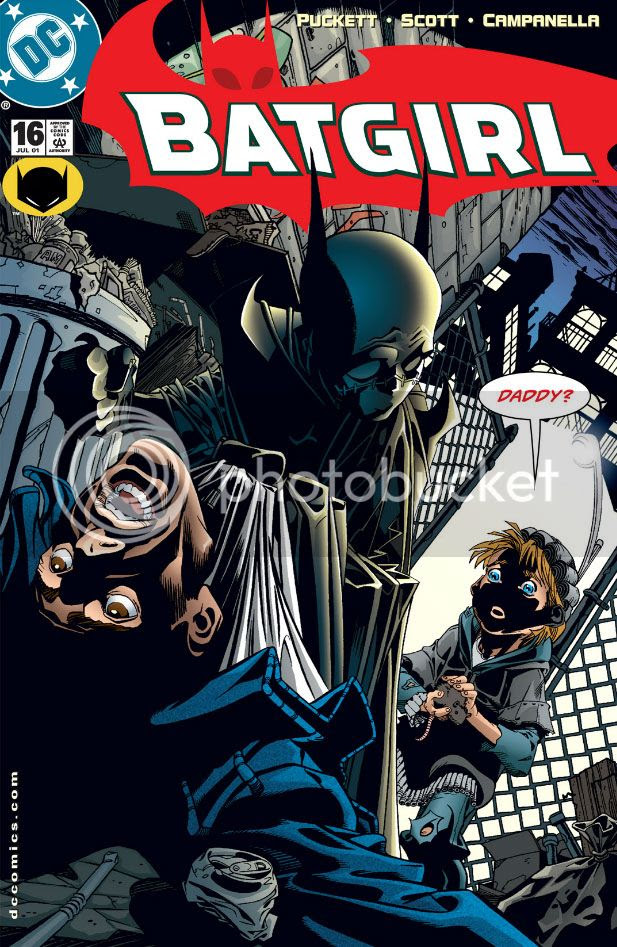 One thing about this Batgirl series—writer Kelley Puckett frequently makes Gotham City itself a supporting character.  Like Will Eisner with his The Spirit stories, Puckett has a similar knack for involving Cass with downtrodden people, usually in moody one-off stories that show the human cost of crime and just how lonely and uncaring a vast, dirty metropolis can be.  Puckett pulls these guest losers from Gotham City's lower levels, just adjacent to its sewers, then examines them sympathetically.  The people Cass meets live desperate lives, come to tragic ends and leave our naïve hero bemused.

Well, any city where kids are reduced to tossing rats in the air for fun is no place to bring up a family.  Especially if you’re a single dad who can’t stay out of trouble.  After Cass breaks up the rat-game, one of its little spectators—Damion Scott exaggerates this kid’s pathetic nature by depicting him as a short, stunted thing, his pants pooled around his shoes as if he’s literally been squashed by the hardships of his life—begs her to help his father, who’s involved in a bank robbery.

Puckett pulls a smart misdirection ploy and even though he spends most of his time with the robbers, the final twist further develops the nurture versus nature theme running through Batgirl.  We know Batgirl’s father to be a horrible person, and he created Cass to be just as horrible, if not worse—you know, the “perfect killing machine.”  At this point in her development, Cass has to believe she can change, that she can overcome biology and even early conditioning to become a force for good.  So it’s important she also reassure the kid of his own basic goodness no matter what his father is really like.  She’s not just bucking up his spirit, she’s also shoring up her own.  Through Batgirl’s story, Puckett explores the influence of parents—are we truly destined (or doomed, in Cass’s case) to become our own parents in the end?  Is violence and dysfunction cyclical and, if so, what does it take to overcome it for good?

I love these short stories, these stand-alone issues.  The best ones pay off in emotional riches, as in this issue’s coda.
Posted by Unknown at 4:22 PM No comments:

It seems like we've been waiting forever for this new Batgirl in Batman Beyond #27, and she's finally hit.  And kicked.  Making her first appearance in the future DC universe-- which I'm not sure is a part of the current DC universe or some other related continuity, not that it really matters-- Batgirl hits and kicks a large number of miscreants while giving Commissioner Barbara Gordon (who now bears more than a passing resemblance to her dad) a helping hand and foot.

At ten pages, the story, written by Scott Peterson, one of the original writers and co-creators of our beloved Cass Cain, is kind of slim-reading, heavy on action and set-up for what's to come.  We'll have to see how it plays out over the remaining twenty pages, right?  On the plus side right away, however, his grizzled Barbara is a fresh take on a familiar character (for me, at least) and he gives Batgirl a nice line concerning her detective skills or lack thereof.

But for me, the major draw now is the edgy sequential art of Annie Wu.  Her work has a slashing, gestural look reminiscent of pre-production sketches for animation (I think she actually does those, too, or something in animation-- her blog talks about working on The Venture Bros. but I'm not sure in what capacity)-- usually those have scads of energy which is then lost through the production process and the need for everything to be "on-model."  Other than that, Wu 's art looks like no one else's.  That is almost always a good thing.  I like to be able to recognize an artist's hand immediately.  And I like her thought process, too.  No "girl version" of the future Batman suit, no ridiculous heels.

Well, is this new Batgirl Cass or not?  Signs point to not.  I don't know anything about this Beyond series, but I have this feeling fans of it who are pointing out her physical similarities to a certain current timeline DC character or her possible identity as someone already appearing in the title are probably right on.  There's another major reason she's not future-Cass you have to read the story to find out, but it's hugely obvious almost from the moment she appears.  One or two panels into it, anyway.

While I'm really hoping DC gets its act together and reintroduces Cass into continuity, it's nice to have another strictly ass-kicking Batgirl.  Barbara's introspection makes for some good reading, but every so often you just want your Batgirl to tear through wave after wave of thugs without a lot of reflection or angst.  A Batgirl who is simply all about being Batgirl.  That was one aspect that attracted me to Cass in the first place.

Anyway, they're off to a good start, a punchy story with the sort of character and art I enjoy.  I knew I was going to buy this as soon as DC announced it-- those factors overcame my reluctance to buy new DC material, especially the Batman Beyond stuff.  I never watched the Batman Beyond cartoon.  I never did Marvel 2099, either.  I have just never cared anything about future versions of today's characters.  So that's giving Peterson and Wu a lot of credit.  And at .99 it's hard to refuse the new Batgirl, especially when she's drawn by Wu.

Still want Cass, though.
Posted by Unknown at 7:05 PM No comments: