This one is by Zoe Maxine, who I don't know.  I just found her work doing one of my Cass Google searches, and I like it!  It works equally well with Cass' Batgirl or Black Bat identities.

The mask and bat-symbol on this one are similar to some ideas I've been knocking around.  The treatment of the ragged cape with contrast lining is brilliant, as is the subtle bat-outline design when she closes the seam across her chest.  That's definitely one I wish I'd come up with, although I'm working up something entirely minus a cape.

Another thing I like in Maxine's design is the "sans belt" thing she has going on here.  I mean, why does Cass particularly need a belt with gigantic pouches anyway?  It's a pain in the ass to get the perspective on those right, and it's not as if she uses anything more than a few batarangs and a grappling hook and line.    Over on Marvel World, Daredevil gets away with just a billy club device, so there's no reason Cass couldn't do the same.  It's fists and feet with Cass.

Fantastic work!
Posted by Unknown at 10:21 PM No comments:

Once again, the Mary Sue is your source for exhilirating Cassandra Cain discussion!

It's really past time for DC to bring Cassandra Cain back.  There never was a good reason for any of the lousy decisions they've made regarding her, from the cancellation of her solo title, to her "heel turn," to putting out a badly-written miniseries recapitulating said "heel turn" after it had already been disposed of as offhandedly as such a stupid character development deserved, to her strange and illogical absence from the "Death of Bruce Wayne" storyline, to the way she was forced to give up being Batgirl for a truly lame in-story reason, to her continued absence in the New 52.  If anything, this is a lesson on how not to treat a character.  Any character.

The comments following this article made a lot of those points in detail.  I do want to take a little time to address a few points raised in it and those comments.

First, I agree absolutely it's mean to pit one character against another.  The whole "why not both?" attitude really resonates with me.  While I think it's fair game to tease a character or make some fun of any of them-- and that includes Cass-- at the same time, as fans, we should be past the "either-or" mentality.

You don't have to love one character by hating another.  Everyone is free to love or hate each and every character on his or her own merits, or their perceptions or misperceptions of those, but hating one character specifically because one loves another is silliness.  They're not rivals.  They're not sports teams.  There's no reason to pit them against each other, or fans against each other.  I like Cass more than I like certain other characters, and I dislike a few characters, but none of that has to do with only having a place in my fan-heart for one and only one character.

If that were so, there would be no way I'd spend time drawing cartoons of Supergirl and Wonder Girl teaming up with Cass-Batgirl, just to give one example.

You can like more than one character.  That's all I want to say.  And it's in no one's best interest to wage war on other fans just because they're not as into your character, or because you feel their favorite character is somehow unworthy.  There's room for every character.  Not everyone can be a Batgirl.  I'm completely fine with, say, Stephanie Brown becoming the Batgirl of record.  But explain to me why that means there can't be a Cassandra Cain as Black Bat in some other DC city.

Second, I would like to know why Cass ended up shunted off to Hong Kong as Black Bat.  Was it because she's bi-racial and part Asian?  As someone pointed out, she doesn't speak Cantonese and her mother is from Detroit.  Hong Kong is a spectacular setting for an adventure series, but wouldn't a Black Bat series set in the DC version of Detroit be just as gritty and exciting?

Third, a couple of commenters write of not liking Cass because she's "dark and broody."  I think she was written that way towards the end of her solo series run, but dark and broody were never the main thrust of her characterization.  I will forever champion the idea of a more violent, Kill Bill-esque Cassandra Cain series, but at the center would be that forceful, never-give-up, never-say-die-although-she-has-a-deathwish version of Cass we first met under writers Kelley Puckett and Scott Peterson.

There weren't too many stories in the original run under Puckett and Peterson where Cass was moping around emo-style.  There were moments where she sat around a bit wistfully, and some where she got upset because she couldn't be Batgirl anymore.  But brooding was not really part of her make-up.  She was more likely to be out hitting things.  She'd be wearing out the training dummies in her private dojo, or having Batman repeatedly hit her in the face.

I would never have gotten into this character if Puckett and Peterson had made her a brooder because I absolutely loathe stories about people with incredible abilities who are made miserable by them.  Cass may have had a death wish due to guilt, but mostly she just tried to redeem herself by doing good, by saving everyone-- and I do mean everyone, including a guy about to be executed in a prison in one memorable story-- and who was so thoroughly into being Batgirl and exercising her abilities she was willing to forgo living any semblance of a "normal" life via secret identity.

The stories themselves were sometimes dark, but Cass was a shining light in them.  A true innocent in many ways, naively trying her best to understand the complex world into which she'd forced herself.

Anyway, let's have no more of this "Cass is a mopey/brooding/downbeat" kind of character.  I reject that characterization absolutely.  If she ever went down that route in a story, then you know you were reading something badly written and you need to go back and pick up the original series and see Cass as she should have been written all along.

So let me just say this once again: it is past time for DC to reintroduce Cass into their comics.
Posted by Unknown at 5:25 PM No comments: 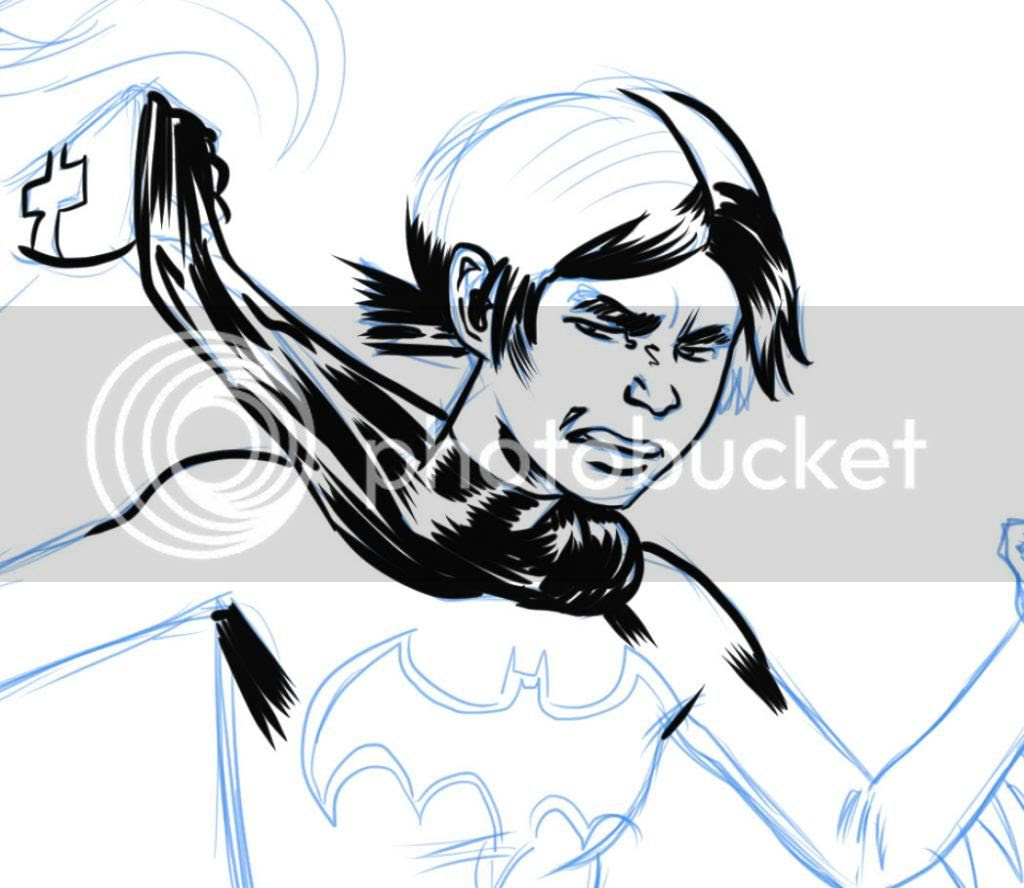 Unfinished blue line rough of Cass versus a Female Fury 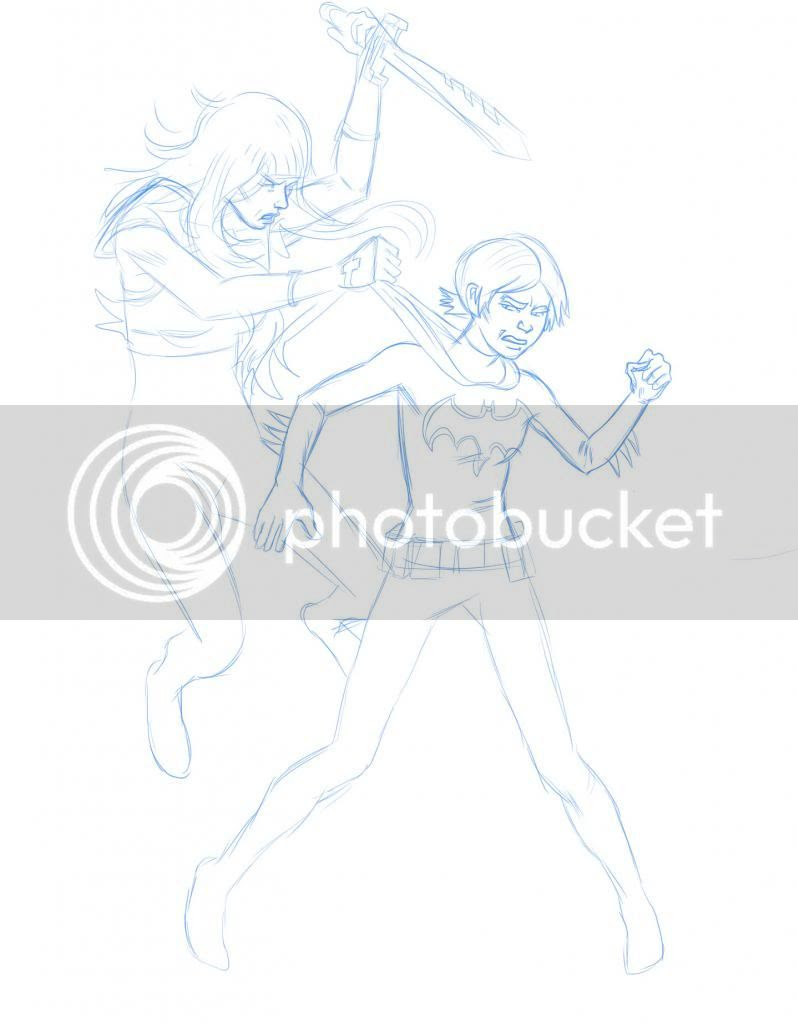 Kind of dull.  The Cassandra Cain pose is stiff and does nothing for me.  I'm also thinking the part where the Fury is grabbing Cass' cape needs to be reworked.  The cape should be on top of the hand, pulled taut.  I may or may not finish this one of these days, and if I do, I'll fix that.  There will be more Female Furies in it if I do.  This is a little sketch of a scene from a story I came up with.  It's derivative of a story that DC actually ran a while back, but I honestly think my version is superior.  In fact, it's so good I'm keeping it for myself and using it in a prose work I'm mulling over, but with greatly altered characters so as to avoid one of those fun little life events we like to call a lawsuit.  Of course, as long as it stays safely locked away in my brain, I can make it about anyone!
Posted by Unknown at 12:18 AM No comments: 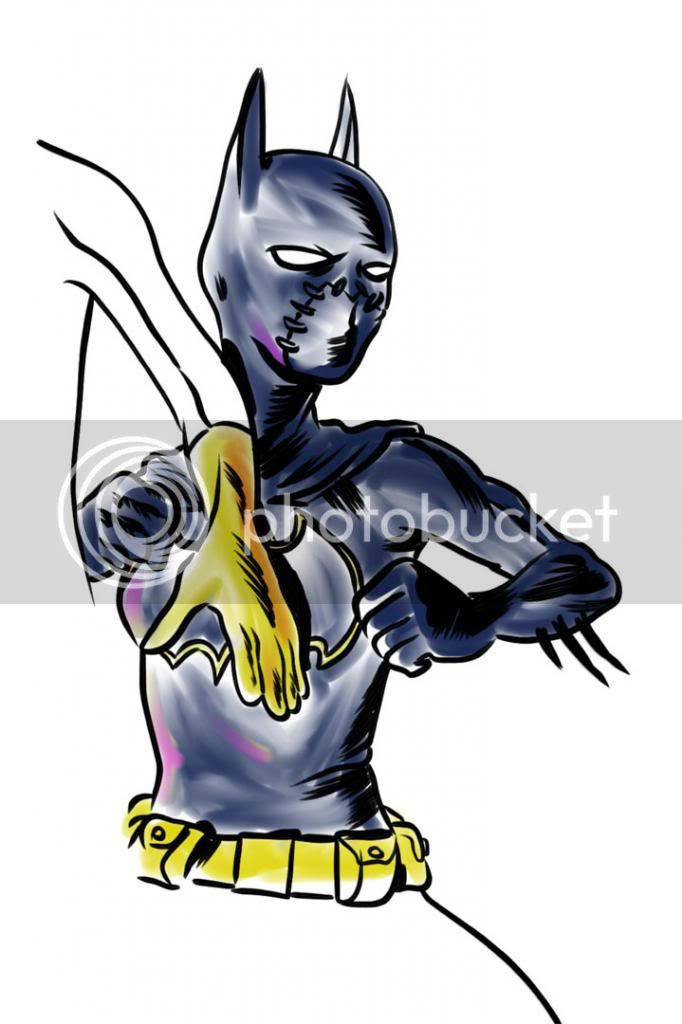 Playing around with color.  This is going to be a most unexpected crossover if I ever buckle down and do it as a finished piece.
Posted by Unknown at 12:35 AM No comments:

The artist calls these "sloppy," but I call them loose and lively and gestural.  Warm ups are important before doing your "real" drawing.  It's kind of like being a relief pitcher.  You don't just step onto the mound and go to pitching.  You warm up in the bullpen first, then take a few throws from the mound.  Artists have to do something similar to loosen up and start making lines that flow properly.  These drawings are what those warm ups look like.  Most of the time we don't share them, but sometimes the warm ups themselves are kind of interesting and useful and worth looking at.  Like these.

That's a free art tip!
Posted by Unknown at 3:32 PM No comments: