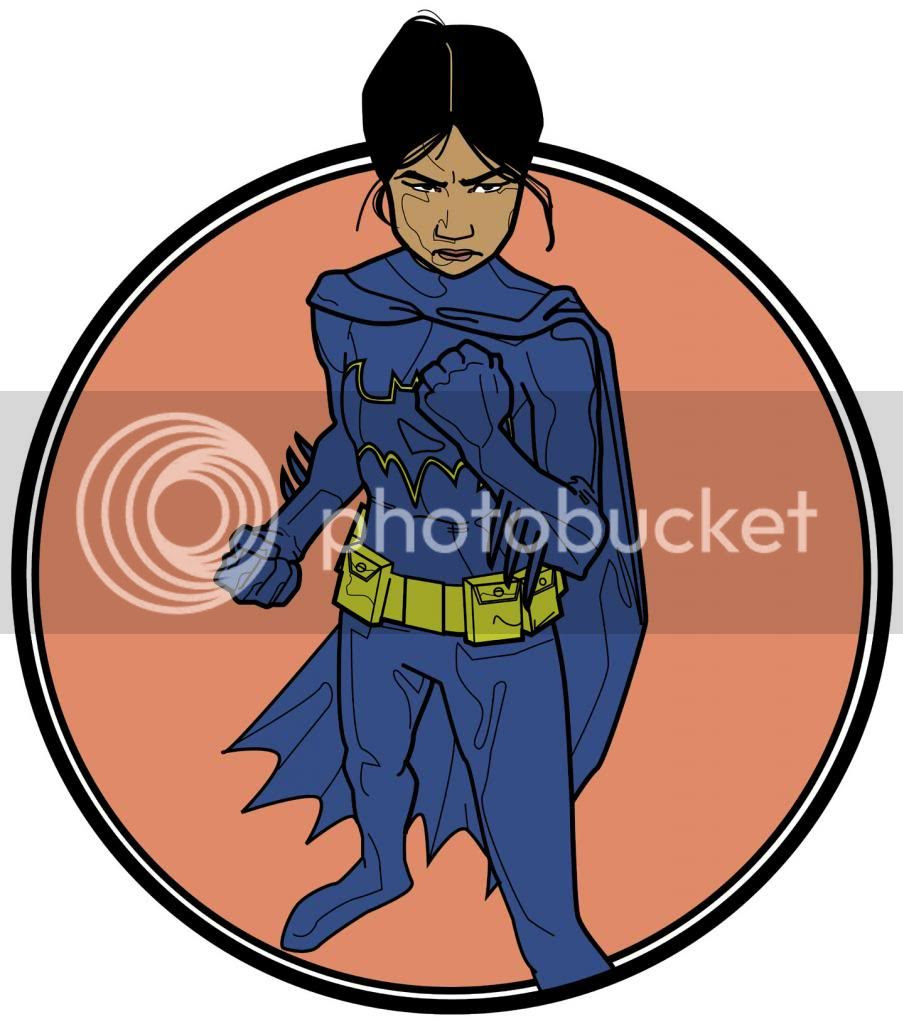 Just trying out something new here. You know, there just aren't enough circles. One of the first digital drawings I ever did was Cass at Batgirl, and now here she is again. I like the solid blocks of color without modeling.
Posted by Unknown at 10:29 PM No comments: 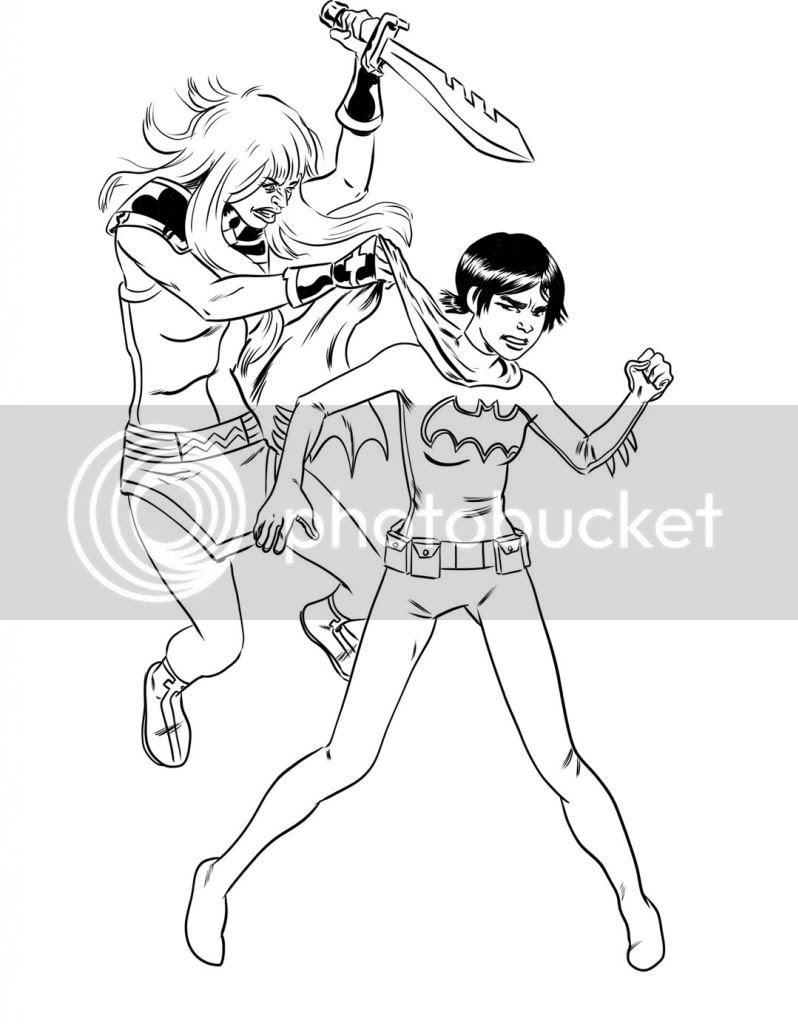 I've long had this idea for a Cass Cain versus the Female Furies story.  Cass would end up on Apokalips and spend time sparring with the Furies, becoming fascinated by their martial lifestyle.  She'd be outclassed and take a whalloping, but she'd learn a lot from them and, in the end, earn their respect.  Mostly because she never, ever gives up no matter what the odds, but also because she's without fear.

I wanted this Gilotina to be wearing Jack Kirby-designed armor, but I couldn't find a drawing that showed her entire body.  And the post-Kirby renderings tended to supermodelize her and emphasize the sexy at the expense of the furious.  Not what I wanted.  So I faked her outfit, and badly.  And Cass' costume looks like footy pajamas.
Posted by Unknown at 8:16 PM No comments:

Cass Batgirl and Conan yet again! 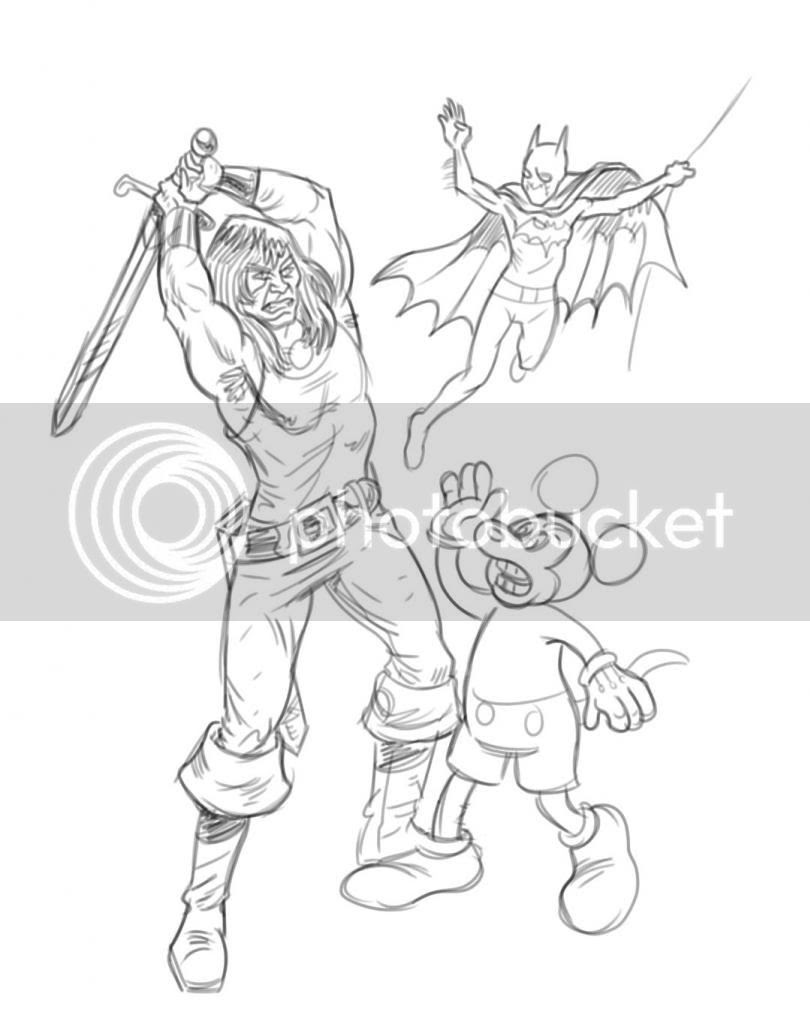 Here’s another version of Cass swinging in to rescue a cartoon mouse.  Why is Conan attacking such a cute li’l critter?  I don’t know.  Just a whimsical idea I had.  This is still pretty crude, done in a hurry over the “bones” of a previous version.  I still need to fix Conan’s right pectoral muscle, but this isn’t too horrid a drawing.  It’s not great, or even good, but it’s almost to the level of an especially clever monkey holding a pencil with his tail.


Yesterday during a meeting I did some beautiful drawings!  My linework flowed and the results were very pretty.  I’m slowly getting back into practice, trying to draw a little every day.  Let this be a lesson—you do lose abilities you don’t use.  I don’t have a lot of time for art these days and my skills suffer for it.  Practice, practice, practice.  Draw every single day.


Last week I read a couple of message board discussions about Cass fighting Conan and Karate Kid.

I have to admit I know next to nothing about Karate Kid.  I do know enough about Conan to say this fight is problematic for Cass even though Conan doesn’t have Cass’ predictive or evasive abilities.

Conan greatly exceeds Cass' strength, weight and reach, plus he also has more than enough practical fighting experience to more than match her in hand-to-hand skill, even if he lacks her finesse.  After all, Conan was literally born on a battlefield, spent his entire life practicing every type of combat imaginable in his era, showed considerable tactical brilliance in commanding troops in battle, has been depicted as single-handedly defeating entire groups of armed warriors, giant snakes and even a strange man-ape named Thak in a hand-to-hand fight, albeit with assistance.

The last happened in the 1934 story "Rogues in the House," by Conan creator Robert E. Howard.  Comics creators have adapted this story at least twice and a scene based on it appears in the 1984 Arnold Schwarzenegger film Conan the Destroyer.  Consider Conan versus Thak for a moment.  We're not exactly sure what Thak is other than a "man-ape," but it's safe to say he's strong.  In the real world, there isn't a human alive who can take an adult ape.  A gorilla or even a fully-grown chimpanzee could rip the strongest man apart.  I think it's fair to assume Thak isn't as powerful as a gorilla or chimp, but he's probably many degrees more so than any given human.  As unlikely as it is, this is all in the Conan canon (hee hee!), so we have to take his success-- aided or not-- into account.

However, because she has speed and defensive skills far in excess of Conan's, Cass's position isn't completely hopeless.  If she has some time to observe Conan in action before engaging-- which would be a best-case scenario and highly variable depending on the circumstances of their meeting-- Cass will soon realize her best chance is to keep her distance and try to incapacitate Conan via some tranquilizing chemical agent and trap him with a very strong net or ropes.  Otherwise, Conan will beat her when it comes to actual one-on-one combat.  Possibly with a broad sword or even an axe.
Posted by Unknown at 7:08 PM No comments: 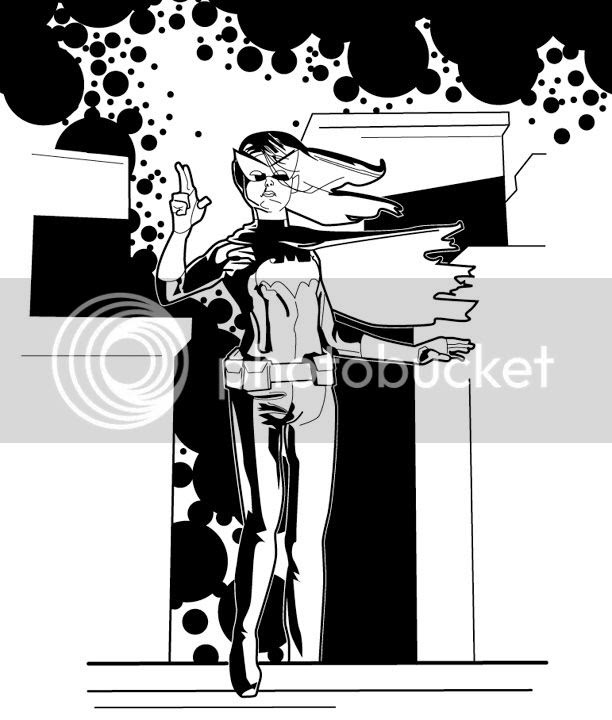 It's about 75% complete.  Just need to adjust a few things here and there.  Proportions, the Kirby dots, some of the shadows, snaps on her pouches.  I haven't done a full-fledged finished piece in a LONG time, so I'm pretty jazzed about this one.
Posted by Unknown at 2:00 AM No comments:

Cass Batgirl versus Conan the Barbarian: The Inkening 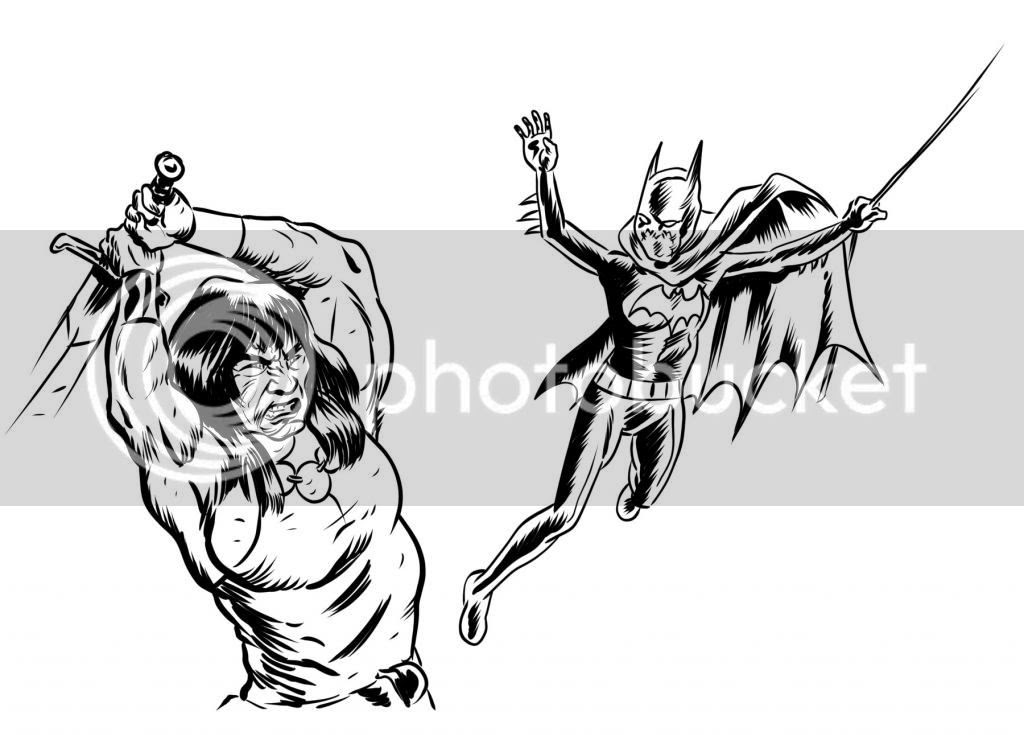 Zooming in with a little ink experimentation.  About 3% of this is good and 97% of it is garbage, but there ya have it.
Posted by Unknown at 12:41 AM No comments:

Batgirl versus Conan the Barbarian! 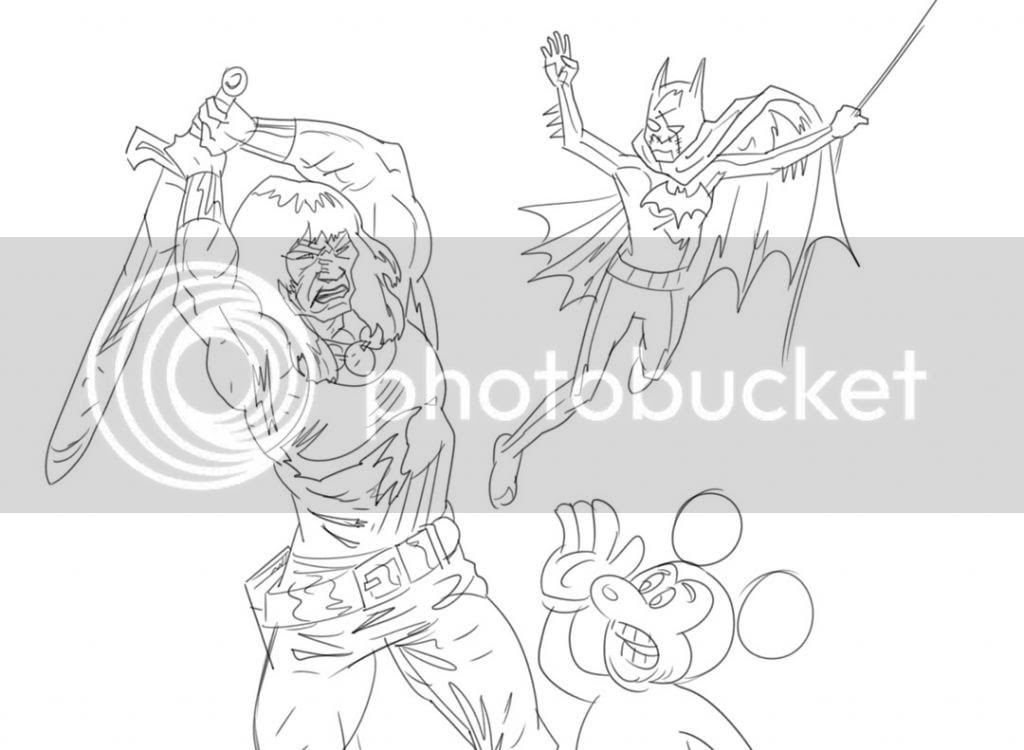 Godawful amateurish crap drawn by me!  Check out that bent broadsword!  Marvel at the scattershot light source!  Despair at the slapdash barbarian mouth!  I'll fix it in inks!  Yeah!  I kind of like the mouse's Jay Leno chin, though.
Posted by Unknown at 3:02 AM No comments: 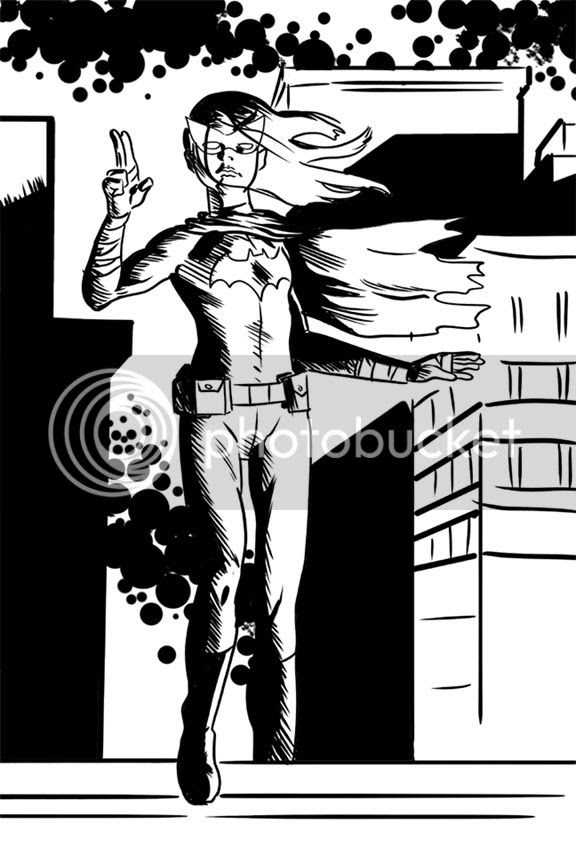 What a disastrous mess!  It's Cass as Black Bat!  And yet I am not ashamed to admit I drew this.
Posted by Unknown at 12:58 AM No comments: