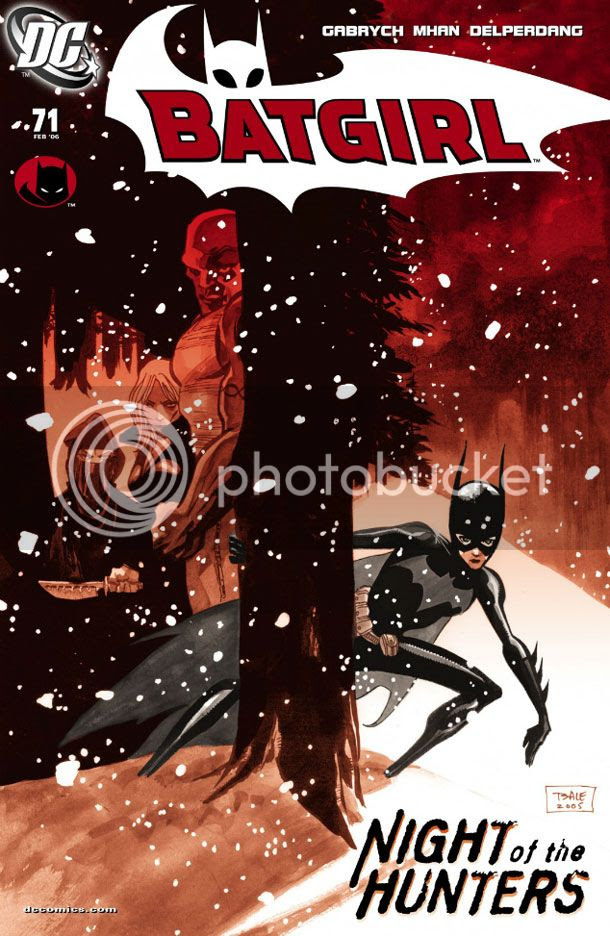 Tim Sale did the last five covers of Batgirl, issues 69-73.  They're stark illustrations, but like the stories inside, sometimes they slip the spotlight from the title character in ways that make me admire them less than James Jean's colorful covers.  Which are stronger designs as well.  Strangely enough, I'm really not as keen on Sale's work as you might expect.  Sale is one of those artist's artists whose stuff I usually drool over, but also one of those comic book people who polarize opinions.  Some people appreciate his gestural, impressionistic approach, others do not.  He's of the Frank Miller school.  Not afraid to ugly it up if the story mood calls for it.

Cass here is fine.  She's a bit spindly, but look at those muscular shoulders.  This is in keeping with her appearance from earlier issues.  The gray bat emblem isn't "comic accurate," but it's an interesting take on her superheroic iconography.  Batman used to have that yellow oval around his bat, which I believe someone once explained as a form of distraction-- his suit has more padding or bulletproof armor there, otherwise it makes no sense a stealthy creature of the night would put on such a bright display.

That's nice and smart, but we know the real reason he had a colorful symbol is it looks like comic book fun.

Now he just has a black bat.

Cass always had that yellow bat in outline, but Sale ditches it for something her mentor more likely would approve of.  "You're a ninja," Batman kept telling Cass.  "Well, you're not a ninja, per se, but you have ninja-like qualities.  Wear something... I dunno... ninja-esque.  All right?"  Cass would just stare at him intently, listening to the meaningless sounds, watching his lips move and thinking of hitting him.

Sale makes the traditional scallop-edge to the bat-cape just some flowing pointed things because that better fits his design sense, I suppose.  The rest of the costume is true to the story-- Cass has had her eye-pieces and stitched over-the-mouth area torn away.  They should have adopted Sale's costume after this story.

Out of all the Sale covers, this is my favorite because it's got the best Cass drawing.  It's still not completely successful, though.  The characters on the left, especially the largest one (who is also awkwardly constructed), strike me as unformed.  I see they're supposed to recede a bit so the focus is largely on Cass, but they look more rushed than stylized and their poses are lifeless; they don't relate much to Cass's dynamic tree-grasp.  Are they meant to be following her?  Are they symbolic figures?  They project a less urgent mood than does Sale's Cass.  The two in the back are just hanging out like they're bored with the whole thing, but as a group, they're making an interesting silhouette or doing much of anything to help get the cover's point across.  A stark snowscape with just this Cass figure would have been preferable as a stronger design, but the story is about how she learns to lead a team so that was right out.