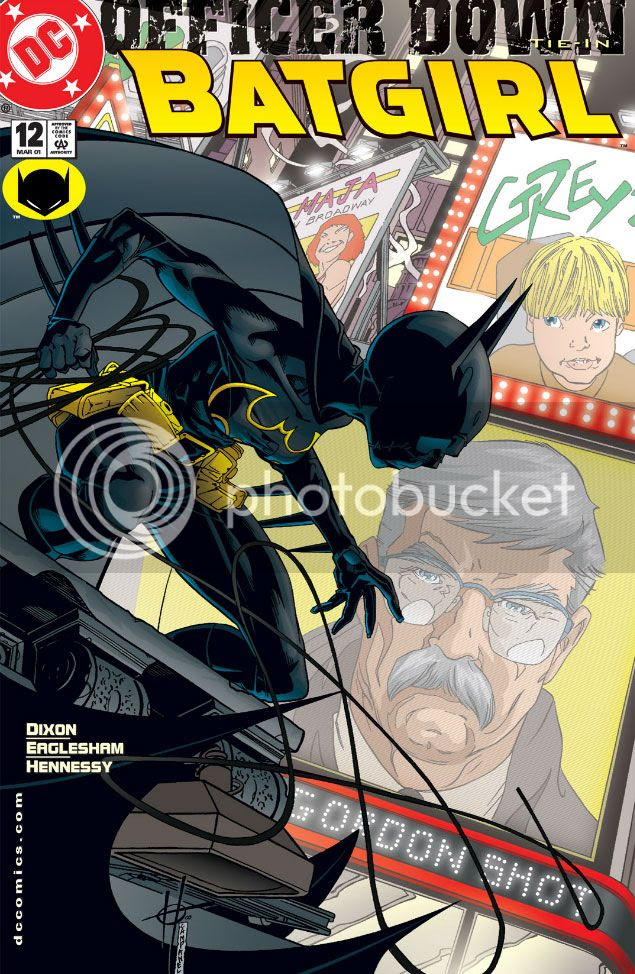 
Letters:  John Constanza
Veteran writer Chuck Dixon takes a shot at Cass with this issue, part of the “Officer Down” crossover that ran through all the Bat-books at the time.  Commissioner Gordon has been shot and everybody’s a little upset about it for some reason.  Dixon finds an interesting voice for Cass—different than Kelley Puckett’s in that it’s a bit angrier.  Unfortunately for Dixon, this issue has major problems thanks to a popular trend in multi-title synergistic storytelling.  Or, simply put, trying to make you buy a lot of extra books in any given month.

And so Batgirl #12 takes us all along with David Byrne on an action-packed road to nowhere.

Actually, David Byrne isn't in this issue, but neither is practically anyone else it's ostensibly about.  I'm kind of surprised Cass is in it.  But she in it she is, and she decides to investigate Catwoman.  Which in itself is a pretty cool idea.

Seriously, think about it.  Cass versus Catwoman.  That's a story unto itself.  How they meet, their differing philosophies in conflict (Cass's martial arts asceticism versus Catwoman's materialism), their relationships with Batman, their similar fashion sense.  But thanks to its beginning and ending being contained elsewhere, what we actually get is a non-event in which Batgirl chases shadows along the outer edges of someone else's story and the confrontation the set-up actually demands—which would have been a classic moment for Cass, no doubt—never materializes.  Or, if it does, it's in some other book, leaving this one feeling half-told or less.

Instead, Cass eavesdrops on conversations that remain opaque because they involve incidents occurring in other comics.  She's not even permitted to participate in these conversations.  Her most meaningful interaction is with a holograph because Oracle-- a major supporting character in this title-- is needed elsewhere for more important duties.  At the end she fights an empty apartment and then some masked jerk named Slyfox and his slug-brained employees in a case of mistaken identity, but it's too little to prevent the issue from feeling like something from another book's appendix or "bonus material" on a DVD which consists largely of out-takes and scenes cut for better pacing.


I realize this comic would make more sense in context if I got off my high horse and spent the money to get the complete "Officer Down" crossover.  But I believed then and still believe you shouldn't be required to buy a lot of titles you're not interested in just to get a full story.  And I'm certainly not going to invest in it now when time has proven the stakes for this once oh-so-important story to be so slight as to be non-existent.

I don't really know who my beef is with here-- company or writer-- because I wasn't party to the planning sessions for "Officer Down," but as far as I'm concerned, if a company does a crossover, they owe it to readers of individual titles to have the chapters stand alone to a much greater extent than this one does.  Either make the crossover the subplot or if you must have it be the main thrust, provide a solid subplot that furthers the main character's unique narrative arc.

Batgirl works on her own personal case that's of prime importance to her and her alone with news reports in the background that distract her a little.  She interacts with her own cast of characters-- this would have been a great spot for another Lady Shiva meet-up or something to do with Daddy Cain or even one of those Eisnerian one-offs where Cass learns some kind of melancholy lesson about humanity Puckett excels at-- and then in the end, when she's wrapped up her business, Batman calls her to come fight with him in Detective or Batman.  Or, even better, while she's wrapping it up, which could create further friction between the two of them when she doesn't come running like a pet dog.  Another idea would have been to have present-day Cass's actions book-end an extended flashback to her childhood that mirrors and informs her "Officer Down" choices and actions.  This would have allowed Batgirl readers to learn more about her backstory, enriching the character in the process while avoiding the feeling she's inconsequential or ineffectual.

I imagine I'm something of a statistical outlier and DC found and will continue to find plenty of suck-- er-- readers to pick up my slack.

On the positive side, the first few scenes of this book have a moody noir-ish feel and while she's not exactly the Puckett Batgirl we're used to, Dixon scripts a terse, driven Cass.  She seems tightly-wound, with a lot of personal pain internalized, and Dixon gives her a stern, taciturn voice in his no-nonsense narrative captions.  In fact, she seems almost as grumpy as I am with the state of Batgirl this particular month.  Dixon has Cass trying her best to be a detective, but she keeps running into the need for literacy.  We've seen her gain an interest in reading before, but apparently it was short-lived.  For now she’s in such a big hurry written words are nothing but frustration.

And it's very pretty to look at.  While my Batgirl-hero Damion Scott tends to caricature the cast, Dale Eaglesham is more in the Michael Golden/Rags Morales detailed anatomy and double-lighting tradition.  Other influences are pretty obvious; at time it looks as though Alan Davis ghosted a few panels.  Eaglesham draws a spindly but muscular Cass who lurks outside windows as if she’s coalescing from the shadows themselves.  The more frenetic pace of a typical Kelley Puckett issue lends itself to Scott’s style and mastery of creating the illusion of movement on the page. the do nothing/affect nothing plotting here means plenty of lurking on fire escapes, waiting, even a genre-friendly rain storm, all of which Eaglesham and and his well-matched inker Andrew Hennessy capture in pulpy imagery made up of what must have been oceans of black ink.  Some art supply stores cleaned up that month, believe me.

And one more thing to keep the positive vibes going here as we close out the first year of Batgirl.  There's a really amusing bit towards the end where Dixon has Slyfox bring up something we really should talk about sometime after I do some real-world research.  See, Slyfox thinks he needs to hire help a girl can't beat up.  Apparently he believes there are some guys who are just chromosome-proof.  Dixon has Cass demonstrate on Slyfox why this just isn't so.
Posted by Unknown at 5:02 PM