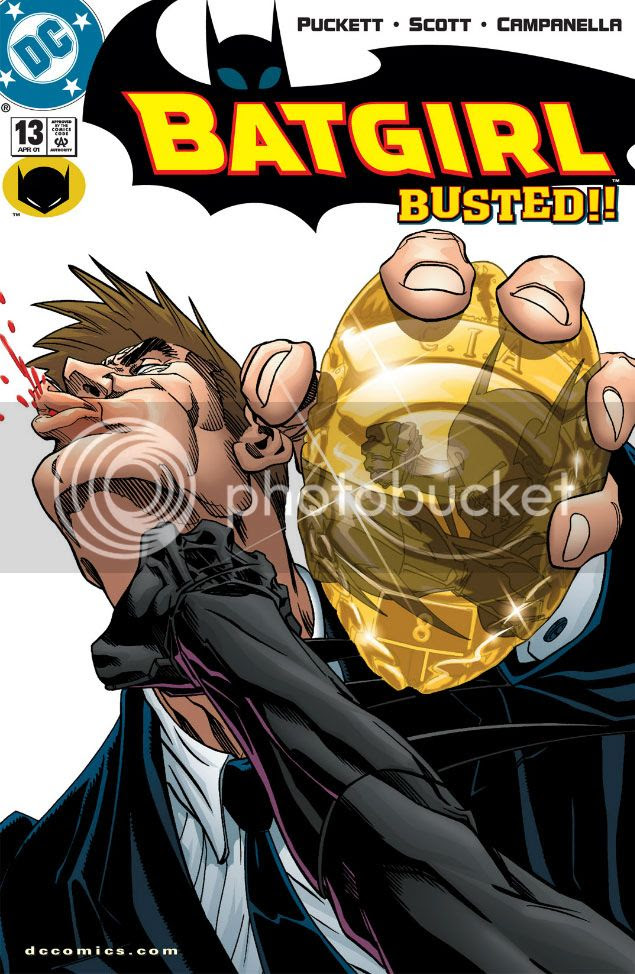 With the “Officer Down” crossover disposed of, the regular Batgirl team jumps back into the game and comes up with a single-issue winner.  A group of nasty secret operatives—wearing those standard-issue sunglasses and black suits and ties—led by a particularly sinister older agent interrogate a sniper with Cass locked away in a cell.  She proves too difficult to handle even for these government-sanctioned killers.  Towards the end we learn a whole lot about her personal philosophy as she explains exactly why she risked so much to help a stranger, and one who isn’t sure he deserves her help in the first place.  Good lord, people, this is how you write a Cassandra Cain comic!

Action and characterization go hand-in-hand this time out.  Even though she’s off-screen for a good portion of the story’s middle, Cass gets to let her more rebellious personality traits show during the final confrontation.  We also get to see Cass through another person's eyes-- a person she has thoroughly freaked out because she is so at home in violence and mayhem yet remains a good person.  Chuck Dixon’s Cass characterization was gritty but restrained and somewhat introverted, while Kelley Puckett’s is explosive, self-assured to the point of cockiness, even playful at times.  Both work, but coming on the heels of such a limp issue, this version of Cass is like a flashbulb going off in a dark room.  The effect is dazzling, and suddenly you remember just why you love this book so much in the first place.

It’s refreshing to see Cass so in command of a situation even when she’s ostensibly a prisoner, especially after all her troubled flailing about after losing her body-language skills and then chasing shadows the previous month.  While Kelley Puckett’s scripting of Cass shows a writer who knows his character and how to fit her into a plot, Damion Scott’s expressive artwork helps demonstrate just who Cass is at this moment in her development.  He gives her a strong physical presence and her facial expressions work with Puckett's minimal dialogue to put each moment across.  Any concern about Cass being a “silenced female character” go right out the window here as words and pictures make it completely clear what she’s thinking, feeling and talking about even when she’s not crowding panels with dialogue.

This is one of those issues writers tasked with scripting the character should have received from DC along with their contracts.  Have her speak when she feels it’s necessary while she lets her body do the rest of the talking, fit her into plots where her presence is integral even when she's not on-panel, throw in a few brutal action sequences.  Too bad not every writer has Puckett’s chops to write her this way, and few artists have Scott’s to successfully translate this into sequential artwork.  When the main action is over, they take us to that revelatory emotional climax that illuminates Cass and her motivations—and with the verve of a creative team confident with their mastery of a particular character and her inner self, what works and doesn't work when writing her, they bring it off without it becoming maudlin or awkwardly verbose.  Puckett and Scott hit us with a short flashback, a very few words from Cass and with just the right moments emphasized.  It’s exciting and cathartic, even a little touching.

Oh, and Cass doesn’t even wear the Batgirl suit this time out.  Instead she’s in some kind of black cropped top and baggy pants she seems to have stolen from M.C. Hammer.  This gives Scott plenty of opportunities to draw Cass’s ripped midsection.  Wow!  I should have abs like that!

Notice, however, in some panels she’s wearing black nail polish and in others nothing at all.  Or maybe punching guys in various parts of their anatomy shattered the paint right off her nails.  Fashion-forward superheroes in the DC universe need to choose their cosmetics with greater care.
Posted by Unknown at 7:26 PM