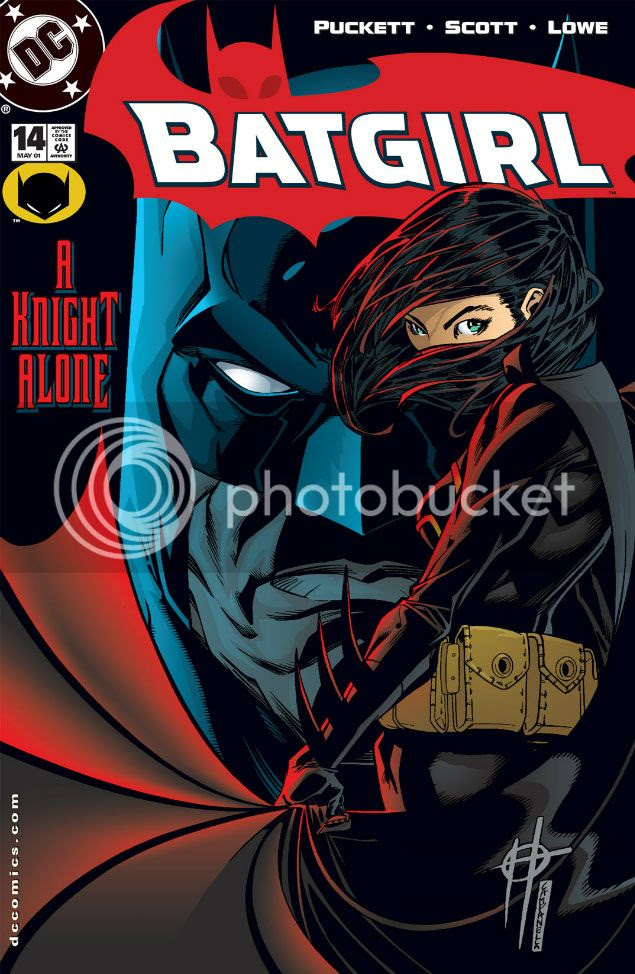 Cass’s imprudent actions from the previous issue have consequences this month as the CIA analyzes her via video and blood tests.  Writer Kelley Puckett has these black-suited government agents drop a lot of intriguing info on our hero Batgirl—she’s not meta-human (DC’s house jargon for super-people) but her aggregate abilities certainly make her seem that way.  We find out she has "off the chart[s]" serotonin levels, by which I guess Puckett is suggesting she has more neurotransmitters in her brain or something along those lines.  I’m no doctor, but I’m pretty sure this is supposed to indicate she has a different brain chemistry than most of us, which accounts for the unusual way in which she processes information, a reasonable pseudo-scientific basis for all the wonders Cass can do.

There’s also a human cost to both Cass and the man she saved, and we learn Barbara is a tattletale.  Which is probably a good thing because if Batman is to have Cass as one of his tools or weapons, it’s a good idea for him to learn as much about her as possible.

This is a melancholy issue.  Cass can act as comedic relief in her own title due to her single-mindedness at times, but her naivete-- especially in this story-- can be heartbreaking.  Despite (or because of?) her abusive upbringing, she must be largely an optimist, with a belief in the light side of human nature even as she explores its darker places.  Witness her cheerful “Bye!” to the ex-agent she rescued in #13, without a thought given to his frailties and conflicting desires.  He tries to tell her in an oblique way, but it simply doesn’t register with Cass.  She doesn’t have the experience yet to understand these subtleties.  And when her heart breaks as a result, she deals with it physically.  Luckily, Batman is available to help her to catharsis this time out.  Damion Scott then drops her into the midst of a seedy group of “ex-Special Forces” for a quick workout in a bravura sequence where Cass moves so fast we don’t even get to see it—Scott illustrates only the results in a quick sequence of panels that still manage to leave no room for misunderstanding.  Guest inker John Lowe fills in admirably for Robert Campanella this issue.  I'm not sure what Campanella was up to, but Lowe helps keep the book looking consistent.

But the most important thing happening this month is the exploration of how Cass functions both physically and mentally.  Along with their seratonin discovery, the analysts studying her compare her to world-class athletes, and Puckett has them reveal Cass’s fighting techniques as "all over the place" and with "no dominant school" (recalled later in the same conversation with a name-check of Bruce Lee, who hoped to "free [his] followers from clinging to styles, patterns or molds"), which is probably all of them since she can learn one in its entirety within a few hours.  These guys can’t believe what they’re seeing, or what their measurements tell them.  The athlete analogy invokes a human operating at her highest capacity.  As the man says, "Humans can throw a 100-miles-per-hour fastball, smash concrete blocks with their heads, and run 4.2 forties.  What they can't do is can't do is all of that at once."  Guess who can.

And this issue doesn't just explore Cass's weird brain chemistry or her fighting skills.  Puckett explores another facet of Cass's functioning-- her sense of self.  Secret identity?  It just never occurs to Cass she might one day go to school or learn to drive a car, which really bothers Barbara.  Barbara has long been portrayed as an advocate for what she considers a “normal life,” dating and friends and all that.  As written here, Cass wants nothing more than to be Batgirl.  Being Cass—or at least the one Barbara wants her to be-- just isn’t important to her at all.  It shows just how relentless Cass is, but you have to wonder if some of the reason for this detachment of identity is residual guilt.  After all, this is Cass of the famous death wish, who has often seemed simply reckless or full of herself when actually she's been courting oblivion.
Posted by Unknown at 7:57 PM