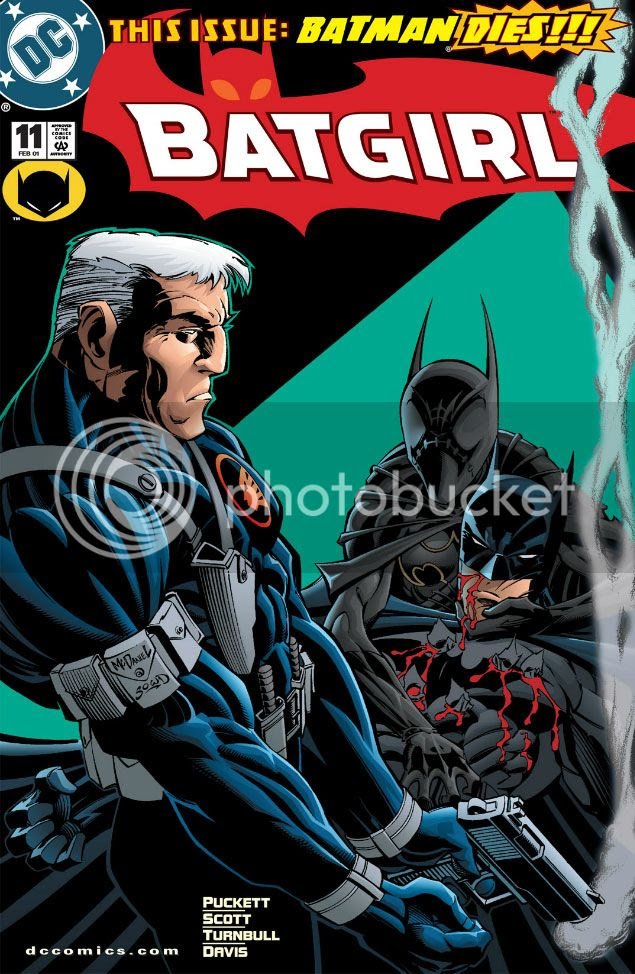 
It's like Cass's own special episode of My Two Dads.  Imagine the poignant scenario of Paul Reiser putting Greg Evigan in the hospital, then Evigan killing some cops, pulling out his own catheter, going to a bar and climbing into a bottle while wearing a purloined suit and badge.  I swear, if My Two Dads featured plots like that, it'd still be on the air.  Staci Keanan-- I mean, Batgirl is a relatively minor character in this issue.  The largest portion of the plot stars Cass's bio-dad Cain in a sitcom guest-directed by either Luc Besson or John Woo.

While Batman and Batgirl both frequently use Cain as their own personal punching bag/whipping boy (and for good reason; he's a sleaze), it turns out the old guy is actually pretty damn tough.  Even with his arms bandaged and under the influence of a major dose of hospital-grade painkillers, he's able to turn the tables on a vengeful Basque policeman, make it all the way from the hospital to his house, then hit Gotham City (the light speed local transitions in this book can be confusing-- I thought Cain was in Macau at one point, but apparently he's just in a swamp not far from Gotham) to infiltrate the FBI.  Along the way he kills or beats up all sorts of sunglasses-wearing cannon fodder.  While Batgirl frequently trades in generic muggers and thugs, it also features their (mostly) law-abiding counterparts-- dudes in sunglasses with wires sticking out of their ears because that's how special agents and police look in action films.  There must be a factory or clone shop somewhere in the DC universe turning out all these people just so they can crowd fight scenes and smash through walls and windows as needed.

Now about those bandaged arms.  Puckett and Scott show us some flashbacks to Cain's beating at Batman's hands.  But what did Batman do to Cain's arms that require complete wraps?  Short of breaking them, that is.  His hands could certainly be bandaged from cutting up his knuckles on Batman, but why his entire arms?  The arms can't be broken, however, because Cain has no problem using them. So I suppose Batman... peeled them?  Even Cain's fingers?  Maybe they're covered with bruises and that indicates wrapping.  I'm neither a doctor nor a martial artist but I can't help but feel something screwy is happening here.

Otherwise, Puckett's script is pretty witty.  Cain may be a complete bastard, but he's got a mouth on him and out of it comes some clever-- if nasty-- lines.  And Scott once again shows he has few equals when it comes to action sequences.  In issues like this, what Puckett and Scott do they do so well it's thrilling-- the comic book equivalent of one of those cool action movies with Jean Reno wiping out everyone Gary Oldman tosses at him, or Chow Yun-fat working his way through a Hong Kong triad.  Nice work by Coy Turnbull and guest inker Dan Davis here, too.  Maybe in a future entry we'll talk about this a little more.

Ultimately, this issue made me really miss My Two Dads.  I still love that show.
Posted by Unknown at 7:28 PM