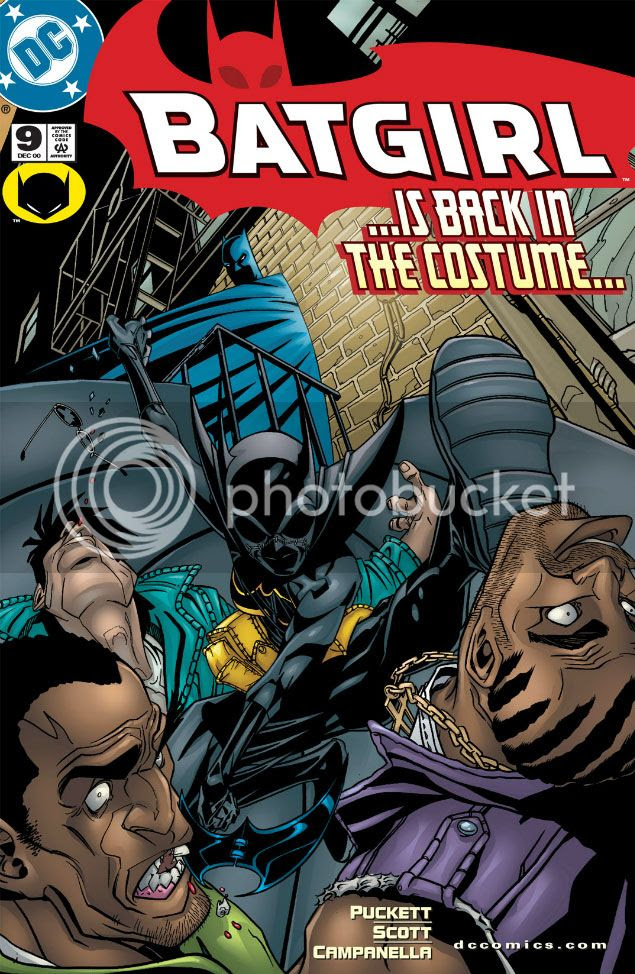 About halfway through this issue, Batman accuses Cain of abusing Cass rather than teaching her, which is funny since he spent a great deal of issue #7 punching Cass repeatedly in the face and generally treating her like crap.  The Caped Hypocrite.  And we learn Cass wasn't the first child Cain attempted this experiment on; she's just the first success.  That she's not the first will come back to haunt the book and trip up later writers as if it's some huge secret, but here it is, spelled out very early in the story with no real reason for Batman to have kept it from his protege.  In fact, telling her might have helped him squeeze Cain out of her life earlier.

The main thrust of this issue is Cass's confrontation with Lady Shiva, where she has to take a beating just to gain an audience.  She recently knocked Shiva out with a sneak attack-- using a broken arm that seems to have healed itself in a matter of days-- which was a pretty gutsy move and characteristic of Cass's lack of self-regard.  When she has to accomplish something, accomplish it she does no matter what the cost to herself.  So you can never convince me she would quit anything short of complete incapacity or death.  And now she needs Lady Shiva's help.

This is another issue where I can't help but compare Cass to Jen Yu.  There's a moment towards the end of Crouching Tiger, Hidden Dragon where Li Mu Bai tries to teach Jen a lesson by tossing the Green Destiny sword off a waterfall.  But even the wise older warrior isn't prepared for Jen's immediate, desperate plunge after the sword into the raging waters below.  Jen wants the sword and what it represents more than she wants to live.  Cass's quest for the perfection of her skills leads her to make a deadly bargain.  She doesn't exactly jump off a waterfall, but she certainly jumps in a similarly suicidal way after something she regards as more valuable than living in some diminished capacity.  This is Cass at her tragic best:  bursting with desire, pushing herself beyond limits, risking everything-- and haunted by her past.

And she's also going behind Batman's back on this, making a bargain with a killer.  This is something she knows Batman will find unforgiveable yet she's willing to risk it to be perfect.  Even though later writers establish Cass as loyal to the Bat-symbol above all else, I believe this is equally if not more indicative of Cass's being loyal to herself and her skills.  Her motivation is to atone for having killed, but she's filled with the need to do those things from which she once derived such perverse joy and which have been taken from her.  Sure she wants to be Batgirl (or Batman), but primarily she wants to be Cass.  Cass without her skills isn't Cass and she feels at a loss, alienated from her essential self and diminished.  It's worth risking war with Batman and death at the merciless Lady Shiva's hands to have those things back.

Puckett spins a fantastically hardcore moment at the issue's end where Cass challenges Batman and proves she can once again dodge his best attacks.  When he asks her how she regained her abilities so quickly, she walks away while telling him, "I gave it... all I had,"  mocking Batman's expectations by throwing Lady Shiva's words back at him.  Little does Batman know how literally she means this.  Scott's facial expressions-- fiercely satisfied Cass and baffled Batman-- enhance a scene where Batgirl attains its full potential, if only for a few panels.  These are the moments that kept me reading this book back in the day.
Posted by Unknown at 1:17 AM