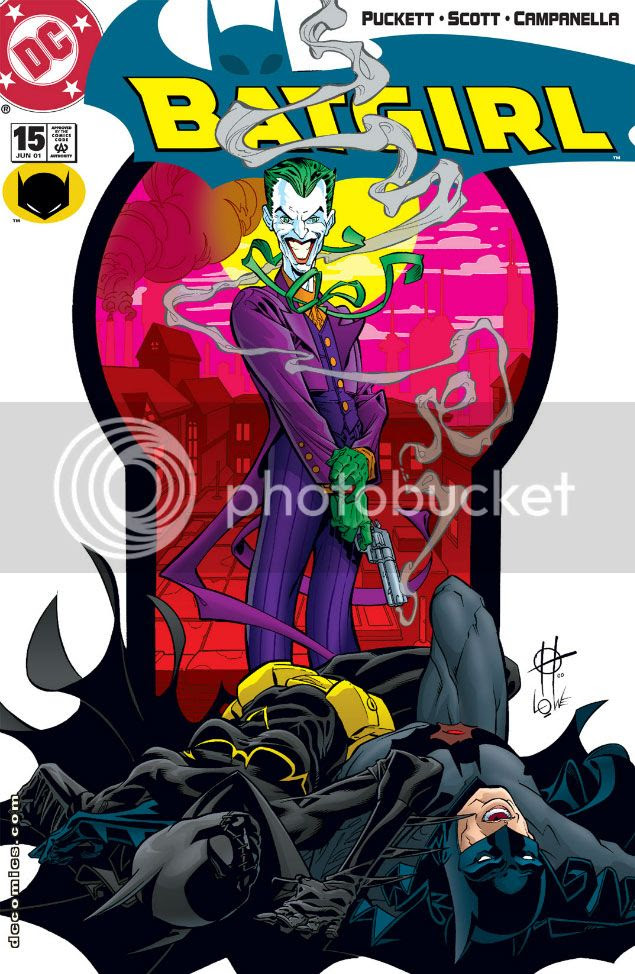 A priest freaks out and starts shooting people in an apartment building and a war veteran goes full-on Rambo (wearing his striped tie as a headband) right on the streets of Gotham City.  Batgirl is on the scene and she tracks the real culprit to a nearby rooftop where she ends up subjected to some kind of hypnotic laser beam device.  Moments later she's chasing the Joker because he killed Batman and when she gets her hands on him, she's mad enough to...

Well, that would be telling.  This is one of the fastest reads so far in the series.  The plot isn't the thing (we never find out what happens to the scientist who invented the story's killing device, although certainly he's in for some major punishment as a result).  What matters is the exploration of Cass' psyche.  We've known all along she was born and raised to be an assassin, a killer.  But has she completely escaped this programming, and just how thin is the veneer of hero?  Is it as thick as her belt pouches, or as thin as the bodysuit she wears?

Instinct and the ability to change and make decisions counter to that instinct is a major theme running through Batgirl.  The character even addresses instinct directly in Batgirl #13.  How much killing instinct is Cass tamping down as she struggles to redeem her one kill by wearing Batman's symbol?  Batgirl #15 suggests it's quite a lot.  Even Cass is shocked by this revelation.  We'll find out more as the series goes along.

Oh, and if you ever wanted to read a comic book featuring scene where the Joker sings Britney Spears, this is that comic.  Although considering what's really happening this is more the product of Cass's subconscious than anything to do with the Clown Prince of Crime and his musical tastes.  Just what kind of music has Barbara been exposing Cass to?  No, pop hits are inescapable.  Even if Cass tried to avoid them by sticking to college radio-- Cass as a hipster?-- she'd still overhear this song in stores or while watching TV.

Which makes me wonder-- what kind of music does Cass like?  It may be a taste signifier that to Cass this particular hit becomes part of a hallucinated Joker's repertoire.  If you dislike something, assigning love for it to an enemy can one way of expressing your feelings about the song and that person.  Or maybe Cass spent the last week or two happily bopping around Barbara's place listening to the song on headphones and it came to her through familiarity, and the association with evil or wrongness is just an accident of the subconscious, as it might be in a dream.  After all, pop usually has a strong, danceable beat and would probably appeal to Cass and her love of movement.  Considering how quickly she learns martial arts moves she could probably pick up dance choreography just as fast.  Would she be able to predict a dancer's next move?  If she watched enough dance she could.

Robert Campanella returns as inker in this issue.  I still have no idea why he took a break.  Maybe he just had too many other jobs at the time, or DC pulled him to put him on something else.  It's not as if the book took a visual downturn in his absence, because John Lowe did a fine job.  I just like to see the varsity team on this book.

Whoever inks, Batgirl during this era has a distinct look.  You could ask for a creative team more in sync than Puckett and Damion Scott, but I doubt you'd find one.  At this point Puckett thoroughly understands Scott's strengths-- action and over-the-top "acting" by his characters-- and provides plenty of opportunities for Scott to work it out while maintaining Batgirl's ever so tragic tone and filling in the sides with character work.  I have a feeling Damion Scott's pencils are pretty tight.  I've seen old style pencils from the 70s and 80s and they tended to be a lot looser, with more room for an inker's interpretation.  Inkers were more responsible for keeping a book's look consistent, especially if the turnover on pencils was pretty high.  These days the penciller carries more of this load.  This doesn't reduce an inker to a mere "tracer," but Scott has such an idiosyncratic approach to anatomy and storytelling you're going to recognize his contribution before you recognize any particular inker's.

Campanella provides all the jagged-edged black spotting and speed lines you could want and while panels sometimes become a bit too busy, that was state-of-the-art stuff for the early 2000s.  A little Michael Golden, a little manga flavor.  When it comes to comic book art, I prefer to see the artist's hand, and I get that a lot from Scott and Campanella on Batgirl.  It's funky and energetic and still fresh after all these years.
Posted by Unknown at 6:50 PM