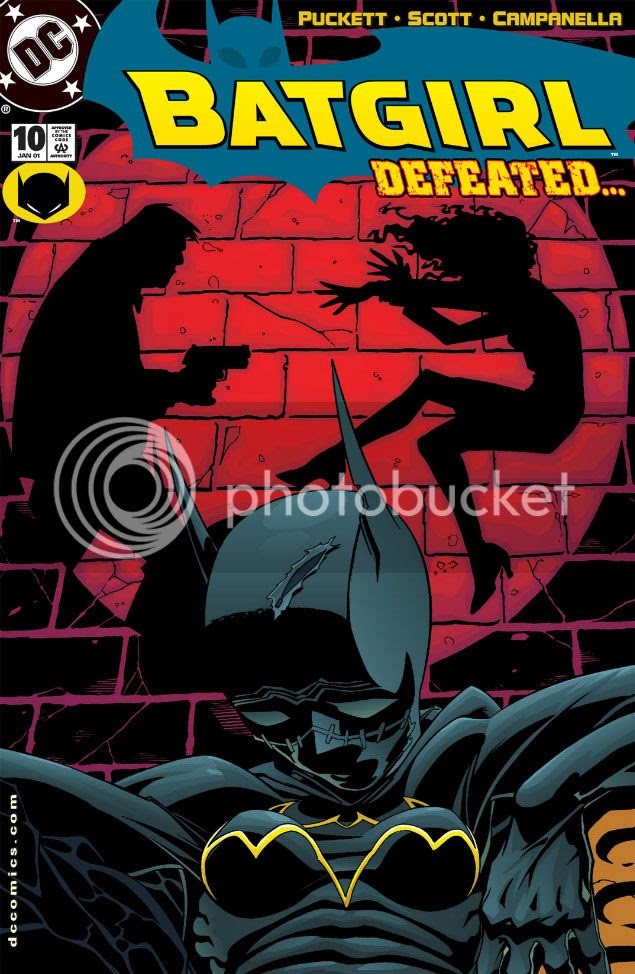 Batgirl's got her amazing abilities back and all is right with the world.  Unless you're big galoot Kenny or his boss Karen, who recently fired Kenny for being such a big galoot.  Okay, we really never learn why Karen had to fire Kenny, but he seems to have some sort of mental problem, or an entire spectrum of them.  He barges into Karen's office to get his job back, ends up escorted out of the building.  When we see him again it's been long enough for his jowls to sprout a scrubby beard and he's slicing away at his hands with a razor blade.  Batgirl just happens to be right overhead whipping up on some generic bad guys-- criminals in Gotham City are sometimes convenient that way-- and she swoops down to stop Kenny from making the worst mistake of his life.

This is another one of those Eisnerian Batgirl tales (complete with background elements commenting on the story), a tragic one-off about the crappy, downbeat lives of your average ordinary losers and how the intersect with whatever Batgirl has cooking.  Kenny turns out not to be so ordinary, but his tale and its unhappy ending serves to amplify Batgirl's determination to be Batgirl despite catching flak from an ever-nagging Oracle.  And Batman must be preoccupied with other matters, because if Cass's failure to stop something she didn't even know about angered him, then the way she screws this one up would probably give the guy a heart attack.

While I get tired of her "You should try to be a regular person" blather, I think Oracle has a point this time-- Batgirl would be fantastic in acting classes.  Or as a mime.  With her ability to learn almost any physical action to perfection just be watching it, she could easily master "walking into the wind" or "the invisible box."  So imagine what she could do after watching a late-period Al Pacino performance.  Which makes me wonder about something.

Cass shows little interest in anything outside fighting beyond plucking petals off the occasional flower or blowing dandelion fluff, but what if you could introduce her to movies?  Would she appreciate modern films or would old slapstick movies be more to her liking?

I have a feeling she'd find the physical comedy of Jackie Chan's oeuvre in line with her sensibilities, but beyond that I'd expect her to show more of an affinity for Buster Keaton and Harold Lloyd than for Tina Fey, Jim Carrey, Adam Sandler or anything produced or directed by Judd Apatow.  And Woody Allen?  Forget it, kid!  Yeah, Cass would definitely be a Keaton-Lloyd fanatic.  Unless her move predictive abilities and understanding of all kinds of body language takes her out of the story whenever she detects a set-up's artificiality, the way I am whenever someone in a movie listens to a song I know damn well wasn't released until after the story's timeframe!

Anyway, it's too bad they didn't throw in a scene were Oracle takes Cass to a film festival celebrating the age of silent comedy.  Then again, the way Cass bucks all of Oracle's attempts at bonding with her or at least making a stab at a semblance of normalcy-- in the final panel she looks positively feral-- I doubt they'd even make it to the theater.

Which reminds me of another point where Oracle is way off base and should know better.  If Cass's abilities approach perfection, why does she train?  As smart as she is, Oracle can't figure it out.  She seems to think it's a pointless exercise, or overkill.  But it's simple.  First, Cass trains because she loves what she can do, the way an artist must constantly draw or paint.  You don't ask Picasso not to paint, you don't ask birds not to fly (unless they're emus or ostriches, I guess) and you don't ask fish not to swim or not to taste delicious when made into sashimi.  Second, because no matter how perfect you are, your skills erode without practice.  This should be obvious to a former superhero.  And third, as this story proves, Cass isn't perfect.

No wonder Batgirl gets so annoyed.
Posted by Unknown at 7:29 PM