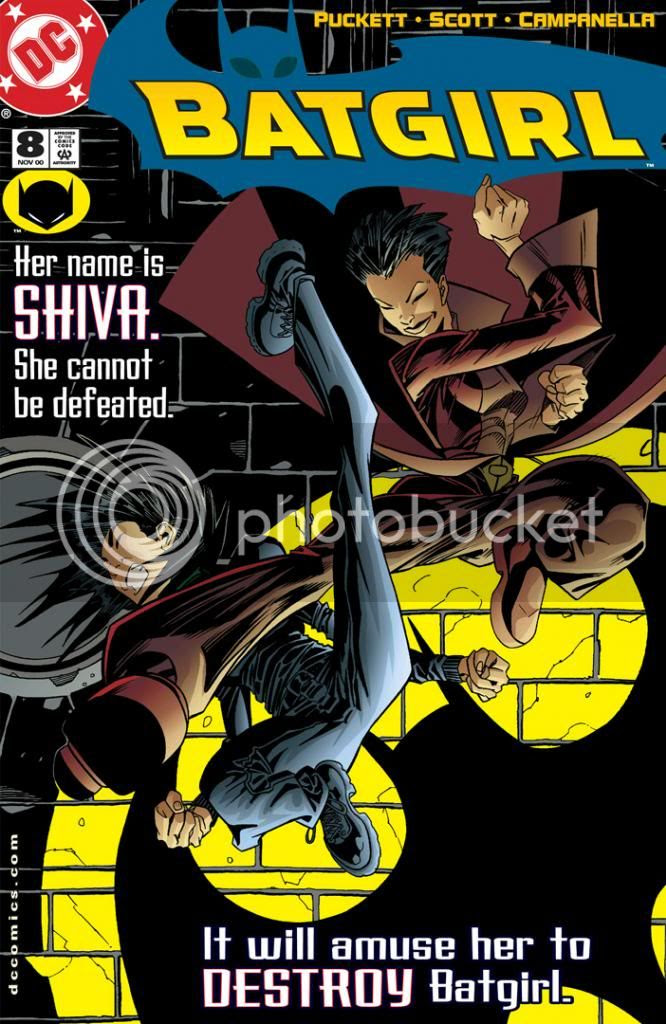 Batgirl needs help with a few personal issues.  Her biological dad is a scumbag, her substitute father is an intolerant bastard, she can't do the thing she loves most anymore and her guilt at having murdered a guy when she was a child has given her a death wish.  Enter Lady Shiva, the permanent solution to all of life's temporary problems.  Noting their resemblance and Lady Shiva's seeming ability to predict an opponent's next move-- just as she used to do-- Cass finds herself strongly drawn to the deadliest woman in the DC universe, a matchless martial artist worshipped as death incarnate by a bunch of boneheads who have managed to infiltrate Gotham City and set up a Lady Shiva worship center (and lending library) right under Batman's nose.  You won't see it this issue (try #25), but it's there.  It means Lady Shiva, a confirmed killer, can come and go as she pleases in Gotham City.  Guess all that stuff about being perfect and infallible the Caped Jackass tried to push on Cass a few months ago only applies when Batman says it does, i.e., whenever a writer requires him to stir up a little drama.

This is about the time I began associating Cass with Jen Yu from Ang Lee's Crouching Tiger, Hidden Dragon.  These are two characters who will risk anything-- even self-destruction-- if it gives them their heart's desire.  For Jen Yu, it's the freedom from restrictive gender and class roles that limited her choices.  For Cass, it's to be Batgirl again, but even more so to regain the sense of self she lost when she could no longer fight at her former breath-takingly absurb level of competence.  Plus, at their best, both Jen Yu and Cass are complete bad-asses.  Few of us reach such rarefied heights, but I think we can easily imagine the crushing despair that results when someone loses something that essential.

Actually, it's Lady Shiva who first draws parallels between herself and Batgirl.  The first is their coloring, which is similar.  It's a nice use of doubling or the doppelganger motif by Puckett.  The other is the killer instinct Lady Shiva detects.  She instinctively (we assume at this point, without our later knowledge of their true relationship) knows Cass is meant to be a killer.  The pearl bracelet, which Lady Shiva points out as just as becoming on Cass as it is on herself, symbolizes this similarity.  Cass can wear the pearl bracelet and become Lady Shiva if she so chooses.  Although what she really wants at this point is to be Batman.

Lady Shiva is one path open to Cass and the assassin does her best to convince Cass to follow her.  It's interesting to note while Lady Shiva is perfectly willing to fight Cass and possibly kill her, she prefers to talk to her and try to get her to achieve her utmost.  This contrasts with Batman's fist-in-the-face-and-stern-lecture mentoring method, where he always breaks Cass down and she's never quite up to his impossible standards.  Killer Shiva would build Cass up, her words almost gentle.  Probably so she can kill her for kicks-- that's her thing-- but perhaps she's simply seeking a replacement.  Or she just can't stand to see someone so talented operating under so many inhibitions.  Lady Shiva is like a master artist looking for an apprentice whose skills and world she can expand.
Posted by Unknown at 6:09 PM