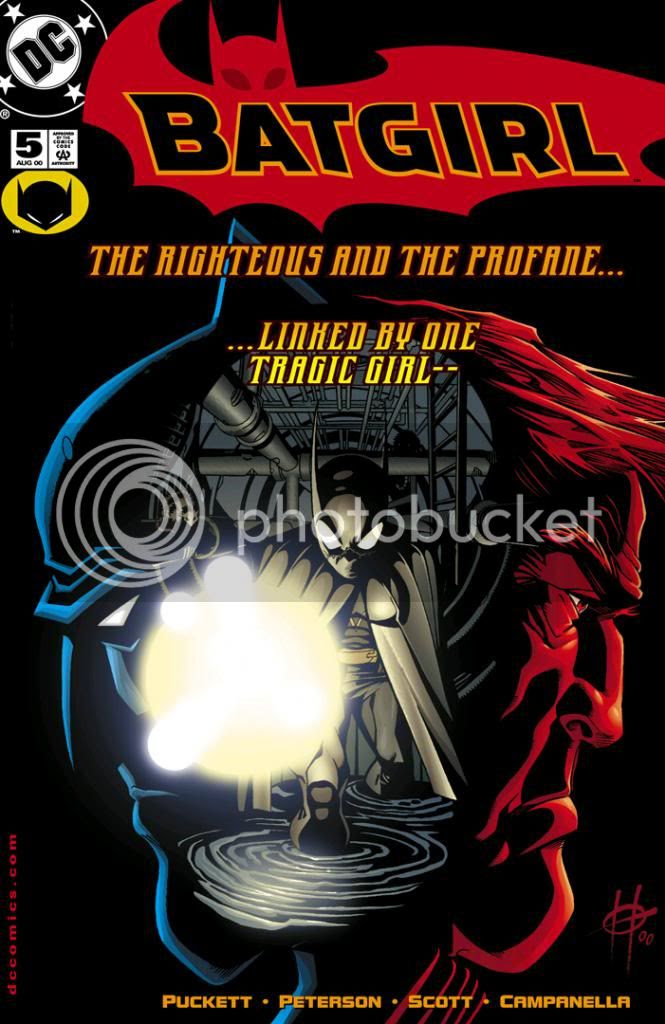 While Batgirl balances the joy of knowing the English word for practically everything-- including "cellulite" for some reason-- with the terror of having lost her combat edge, Batman confronts her biological father in Macau over the snuff film he made of his daughter performing her first kill.  You know you're in trouble when you style yourself as the "world's greatest detective" and you come off looking like a doofus compared to a mercenary killer who abused a small girl as some kind of sicko science experiment.  Batman manages to do that very thing.  He also manages to sandwich that confrontation with a couple of flights halfway around the world in the space of a day.  Fast jet, huh?

It's refreshing to see Batgirl having difficulties and she's at her most engaging this issue.  Most especially when she desperately tries to communicate with Barbara Gordon but gets so caught up in the joy of being able to understand words she almost forgets she's in a hurry to save Mr. Jeffers, the psychic guy (Peterson and Puckett finally get around to naming him and he never gets a first name, the poor doofus).  Then it devolves into a dumb joke. But that's okay because the rest of the issue is gripping action movie stuff where Cass has to protect Mr. Jeffers (the psychic) from all the thugs who want to claim him.  Which isn't easy for her anymore.

Do you remember learning to read?  When words began to make sense and the entire world and universe opened up to you through books?  That's roughly analogous to what Cass experiences here.  Some of us learn from our teachers, others are like Scout Finch from To Kill a Mockingbird and seemingly born reading.

The anti-Cass, I was self-taught and have distinct memories of puzzling out the words (Mr. Natural advising me to "Stay Cool, Baby.  Stay Cool.") on a sticker one of my big brothers put on his closet door.  It took weeks of intense effort.  I was about four, maybe five.  Kind of precocious, but not spectacularly so.  Some of these genius kids are already learning multiple languages at that point.  But somehow I made the connection between what we said and heard and those shapes I kept seeing on that sticker, and on signs or in magazines or my picture books.

"I know what that says," I told my parents one night when we were driving around looking at Christmas decorations.  We had just passed under some words spelled out in white light bulbs and garlands strung over the street.  "It says, 'Seasons Greetings' backwards."

The first day of elementary school, I went around the room and read all the signs on the wall out loud because I was a smarmy little show-off.  "I won't have him for long," the teacher told my mom.  And sure enough, they sorted me into the "already reading" class, which split me from my best friend up to that point.  I cried.  When Cass finds out she can do the same-- but can barely speak-- she's practically giddy.  For her, anyway.  Probably because it comes all at once, a thunderclap of comprehension.
Posted by Unknown at 2:20 AM