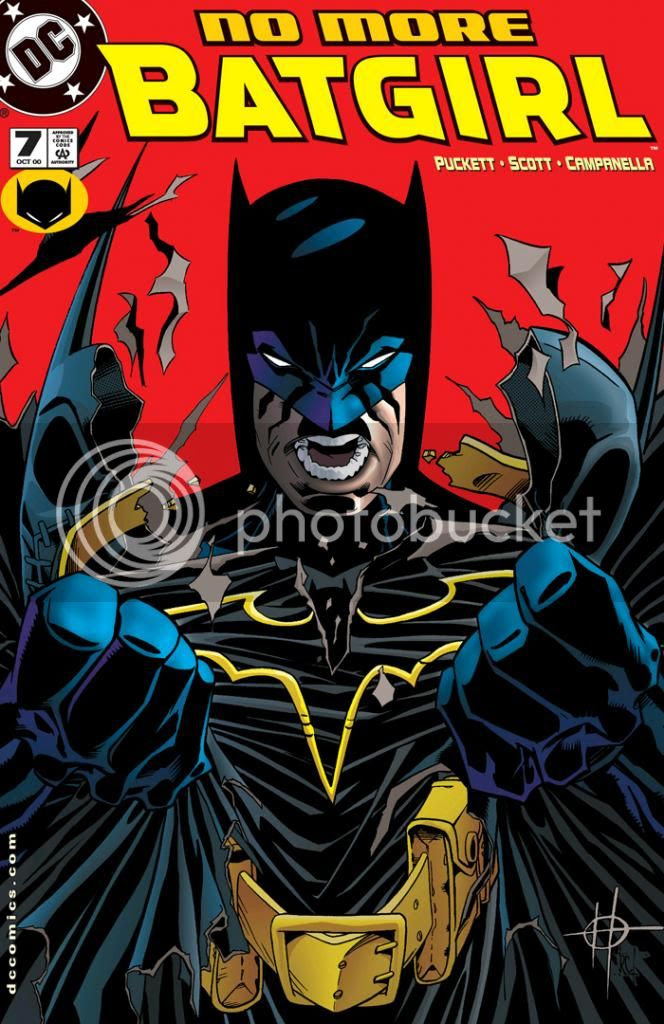 Batman is also upset at Cass.  Yeah, yeah, when is he not?  In this case, it's because Cass has let him down.  She's lost her edge as a fighter and she's no longer the sharpest knife in his kitchen drawer.  For now Cass (still bandaged from the multiple gunshot wounds she suffered in the last issue but otherwise showing no ill effects!) has been sidelined, forbidden by Batman from putting on her beloved costume and swinging through the night on her bat-rope or whatever it is heroes without drivers licenses do in Gotham City.  The book gets off to a slam-bang start with Batman literally punching Cass right in the face.

"This sucks," she thinks.  Which isn't very eloquent but is a major improvement over the previous issue's Frank Miller-style Cass narration.  She demands Batman try to hit her again.  And he does.  "This really sucks," she concludes after he gives her some kind of magical computer disk full of fighting lessons.  Even Oracle's joke about the disk being "Batman's Greatest Hits" doesn't cheer Cass up.  Yeah, that's just what you need when your mentor beats you up then tells you to study stuff you should already know-- dumb jokes.

Luckily for Cass Batman leaves town.  That frees Cass to don basic black, paint her face (Scott and Campanella make it look like scales) and start roaming around beating up low-level bad guys using surprise as a substitute for defense.  Oracle figures it out in about two seconds and tells her to stop before she gets into some serious trouble.  Then Lady Shiva shows up and Cass is immediately smitten.

Batgirl can be a funny book at times and there's a lot of comedic potential in Cass.  There's her taciturnity, her lack of basic social skills (although she seems to have a thing for lipstick here), her occasional impulsiveness.  The point isn't to make her a clown, but to allow for some lighter moments growing organically out of her all-business attitude and naivete.  It balances out the hyper-kinetic violence and also plays to a couple of Damion Scott's artistic strengths:  coming up with goofy facial expressions and giving the characters vivid, easy-to-read body language.  Peterson and Puckett work this angle when they have Cass interact with a server in an upscale restaurant (she waltzes right in and gets a table without a reservation!) while she consumes three whole bread baskets by herself under the pretense she's a regular customer.  It's a lot funnier than Oracle's groaning attempt at comedy.

Cass is really there to spy on Lady Shiva and I love the attraction here between the two.  The writers strongly tease their deeper relationship, but beyond that, the danger of Cass is we can't be sure at this point how far into the light she's come, or how long she'll stay there.  She's still under a lot of pressure and Batman isn't much more supportive or non-abusive a father-figure than Cain.  His methods of training-- even though Cass demands it-- mirrors her treatment by Cain.

Batgirl also works well when Cass is frightening.  Even Batman is more than a little disturbed by her insistence on being punched by him.  Oracle references her attraction to danger, too.  You could see this tendency leading her to seek tutelage under some greater teacher, to Cass risking her body and soul so she can perfect her skills on a higher plane than the uptight, hypocritical Batman can provide, falling under the spell of someone so similar to herself.  Then giving into the temptation to accept a darker destiny.
Posted by Unknown at 4:21 PM