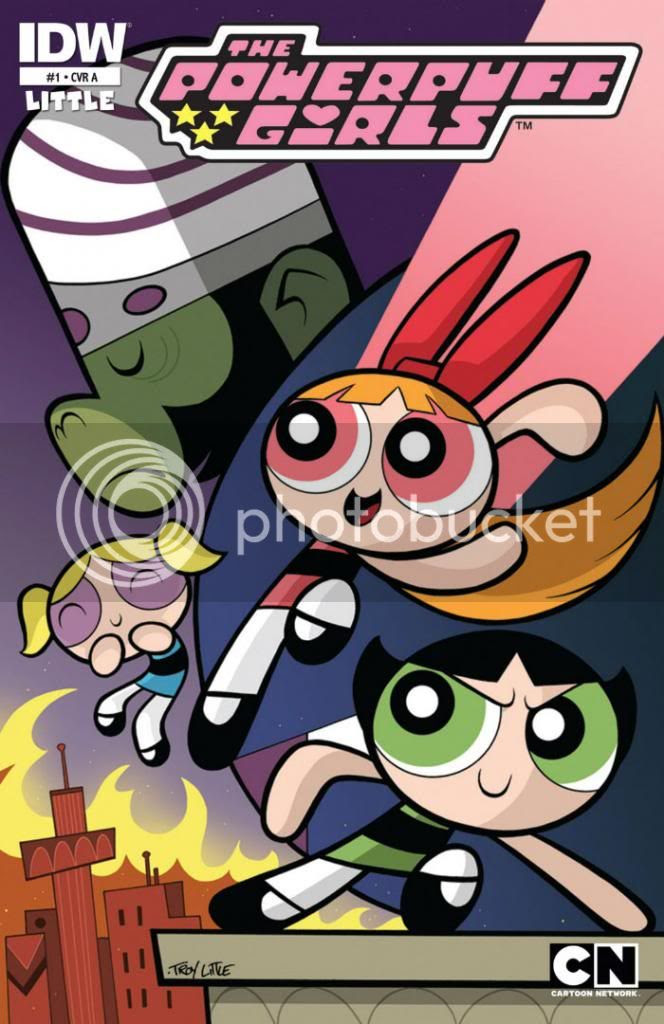 Well, it took The Powerpuff Girls to make me break my rule of never paying 3.99 for a comic book.  So I guess the rule actually is, "I rarely pay 3.99 for a comic book."  And while I feel 3.99 is usually too much to pay for any comic, even more than a person with a hardline stance on comic book price points, I'm a person with a hardline stance in favor of anything to do with the Powerpuff Girls.  The show combined a kind of aggressive cuteness with a whole heap of aggressive violence, and the girls have always amused me with their primary color schemes and huge, oval heads.  And most especially with their digitless hands.  Strange how they're still able to grasp their toy phone hotline or crayons at their kindergarten with no fingers.

Their Cartoon Network series is long off the air-- except, possibly, for here in Japan, where the show still aired daily as recently as 2010-- and DC's monthly ended in March 2006, so it's been a while since Blossom, Bubbles and  Buttercup streaked from Professor Utonium's house like a supersonic rainbow just in time to save the day.  And yet here they come again, courtesy IDW and series writer-artist Troy Little.

Little is the creator/artist of something called Angora Napkin, an Eisner-nominated series.  I haven't read it, but I've looked at its covers on Comixology.  They're attractively retro, one parodying my beloved EC and the other my almost-as-beloved Claremont-era The Uncanny X-Men comics.  His art in The Powerpuff Girls #1 is absolutely outstanding, full of appeal and on-model accuracy.  The panels look almost like frame grabs from the TV show.  Little gives the girls thick holding lines around their outside contours and sprinkles some painterly texture on the backgrounds that makes the figures pop as if they were on traditional cells in front of painted backgrounds.  There's a richness to the color design that also matches the show's Mary Blair-goes-Saturday morning aesthetics.

Little absolutely nails the show's tone and comedic sensibilities, complete with intrusions by an off-panel narrator courtesy of captioned asides.  Gags that work on TV don't always translate directly to the comic book page because it's impossible to reproduce timing and vocal delivery.  The creator has to find ways to trick the reader into supplying those aspects.  In recreating everything from the Mayor's obliviousness to the girls' overweening self-confidence to Mojo Jojo's tendency to ramble, Little thoroughly succeeds.  When the girls defeat Mojo Jojo's latest robotic creation and humiliate the brainy chimp, he faces an existential crisis.  Blossom, Bubbles and Buttercup accept the city of Townsville's accolades once again-- all the while continuing to mock Mojo Jojo, who languishes in jail before he hits upon a solution to all his troubles that's quite shocking and unexpected.  Despite the welcome familiarity of the preceding events, the last page promises a venture into new-ish territory, so it certainly left me wondering where Little is taking us.  There's an oddball golf-based subplot, but even that's... dare I write this... right up the PPG's alley.  Little takes the animated violence a bit over the top, just as the show used to on occasion-- remember Mojo Jojo's broken helmet with exposed brain and shattered teeth.  The girls were even known to chop off monster tails from time to time, if I'm remembering correctly.

Not having read DC's series-- which ran 70 issues, a mere three shy of Cass Cain's Batgirl total-- I can't really compare it to IDW's take.  But having watched almost every episode of the cartoon show, I can safely say Little's version feels like the real thing.  It's also charming enough on it own and really deserves to find a large audience.  We need more of these all-ages type books, especially ones like The Powerpuff Girls that provide ample fun and enjoyment while not condescending to anyone.

It's just a fine comic.  I wish I had a printed copy to feel if it has the weightiness of a Bongo Comics product.  Those are a bit pricey, too, but they have heft and nice texture to them that make them seem deluxe compared to the flimsy offerings of larger publishers.  I'm hoping IDW has matched that with The Powerpuff Girls, but I have it digitally.  My computer is certainly heavy as heck.  As things go now, this comic makes me want to buy the show on Blu-Ray and watch it all over again.  And at the very least, give the second issue a go.  You should, too.
Posted by Unknown at 9:57 PM