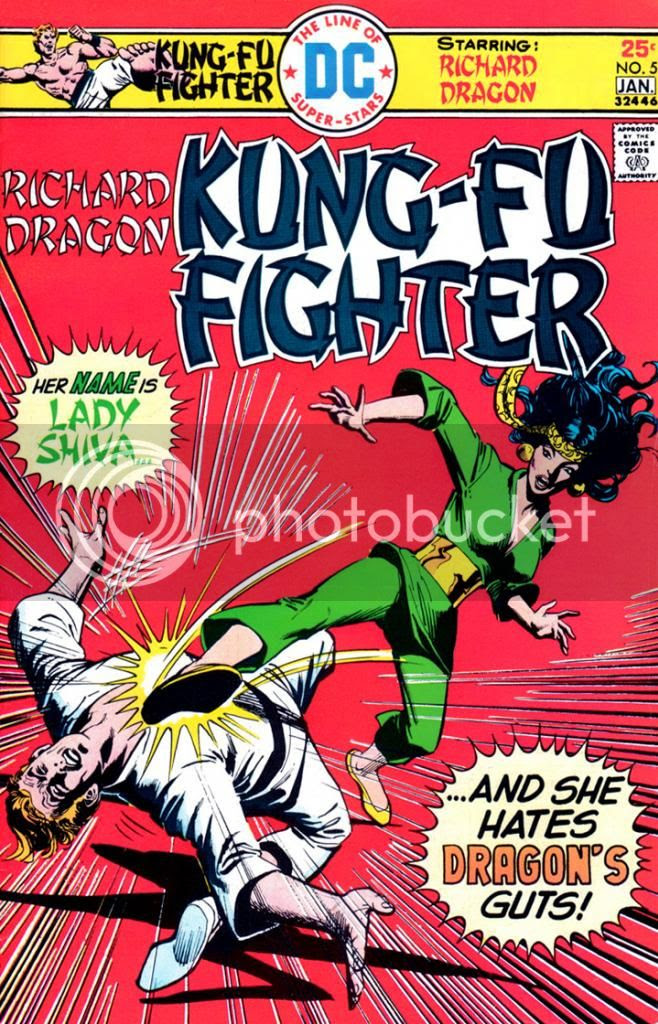 Her name is Lady Shiva, and she does hate Dragon's guts.  Actually, her name is Sandra Woosan and the reason she hates Richard Dragon is because she thinks he caused her sister Carolyn's death.  This is how she appeared in DC's Richard Dragon Kung-Fu Fighter #5 (December-January 1975-1976).

She's changed a lot since then-- even more so since the advent of the New 52-- but back in the mid-1970s, Lady Shiva wore a head scarf stolen from Rhoda Morgenstern.  One thing that's remained constant throughout her various DC comics incarnations is Lady Shiva's ability to deal out ass-whippings.

When we first see her, she's in a purple hood and green pants and art team Ric Estrada and Wally Wood have craftily drawn her to look like a man.  In her very next scene, they have her in some kind of Asian fetish dress and looking definitely female.  Later, when she finally gets to fight Richard Dragon, she's back in that purple-green hooded outfit but this time sporting a more feminine shape.  She quickly ditches the hood and spends the rest of the issue in the same green outfit we see her in on the cover.  She starts by throwing shuriken at Dragon, but doesn't hit him, for as she declares in her best Inigo Montoya impression, "I deliberately missed you, pig... To prove I could kill you easily!  Instead, I prefer to do it otherwise...  ...To pound the life from you!  For I am Sandra Woosan...  ...And you caused the death of my sister!"

As the fight begins, Dragon protest, "Sandra... Shiva... We have no quarrel--"

"Afraid to strike a woman, pig?"  Sandra sneers and punches him in the face.


Within a few moments, Dragon convinces her he's not the one responsible for Shiva's loss, that it's Cravat, grotesque-looking guy shooting death-rays at both of them just to make their fight more interesting.  He's drooling, too.  Without missing a beat, Shiva turns her rage on Cravat, but Dragon prevents her from landing a killing blow.  He asks her if the two them are now friends.

"Until further notice, Richard Dragon... we are!"  Lady Shiva tells him as they shake hands.

What a performance.  What a first impression!  Of course, Lady Shiva is another of those dragon lady stereotypes, but she's delightfully amoral and her free way with insults combines with that quality to allow her to steal every panel she's in.  She's way more charismatic and interesting than Richard Dragon, which may explain why she keeps re-appearing in the DC narrative while Dragon has long been relegated to a footnote and why when Cassandra Cain needed a powerful mom to complement her creepy dad, Scott Peterson and Kelley Puckett went with Lady Shiva, renamed Sandra Wu-San by that time.  Fighting is her thing and she's one of the best in the DC universe right from the get-go.  She'd go on to help Dragon in further adventures and we'll talk about them soon right here!
Posted by Unknown at 1:03 AM